I'm a G boy, standin in my G boy stance

Don't get it fucked up, I'm a grown-ass man

Fo' my niggaz that can relate, Mo. P salute ya

Build up the nigga shit for our kind of niggaz

Here's to you my nigga we proud of ya

Let's get it goin (there you go, Billy Danze) Fizzy Wo'

But time's up (that's fucked up) nigga get gone

And braise, everyone of these Y.G.'s

IF Y'ALL DON'T GET BACK, you gon' get yo' ass put on chill

Get a drawer filled and catch a raw deal

Since money make your world go 'round, that's true

And money make you do the dumb shit that you do

(WHO WANT TWO?) The fuck is wrong wit'chu?

How could you switch your character and turn your back on your crew?

I spit that old school shit like Lakim Shabazz; this is not a facade

It's the baby boy of Leon and Mrs. Lynette Barnard

My other half, the illest voice of hip-hop today

IT'S the baby boy of Big Frank and Mrs. Hattie May

(OKAY!) You fuckin with the real motherfuckers

Home of the one-eight-seven BITCH, who want my John Hancock?

I ain't talkin no autograph written

Run on up like {?} got you buff and get fucked the fuck on up! Nigga

M.O.P., Fizzy-yoski-Woski, holla at me nigga!

Aiyyo it's William and Womack y'all talk about throwbacks

Yeah, nigga hold that, you know we gon' promote that

Come back for the hood in the hooptie nigga

Y'all can't control that, you niggaz is so whack

You niggaz need to know that, me and the homey run rap

You know where the show at come (SHOOT ME NIGGA)

Salute me nigga! (Salute) It's me

What it's gon' be, I'll stomp, you flinch

The AK (ay) Shareetha Lynch, I'm givin you a hint

To get it'll take a little sense

I'll come through the illest part of town when I'm bent

You and your homies can hold these! 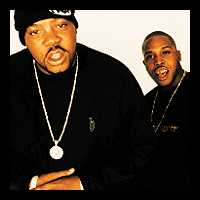