All begin in 1989 wen Ares and the vocals Langsuyar get united with the name MORBID GOD. The base was created in Moonspell's fall in 1992. The first, and the last demo of the band, now with the name Moonspell, called ANNO SATANAE, was released in January 1993, with a total of three songs. Later, the publisher Molon Lave Records put to that edition more two songs. January 1994 marks the beginning of the band with an edition of a mini-CD called UNDER THE MOONSPELL, by the French Adipocere Records.

The reaction to this first (theoracly) work was so magnifying, that the Century Media Records signed a long term contract with the band. So, in the latest 1994, Moonspell get into Woodhouse Studios in Germany for record a new album called WOLFHEART, the first long CD.

The band was a bit rude at the time, witch is quite normal, but their capacities of interpretation developed in a fast way, revealing then the big progresses since the last mini-CD.

In 1996 a new album came out, IRRELIGIOUS. Opium was the first single used to promote the album, and it worked. The videoclip Opium, caused a lot of controversy in all TV's around the world, but even so the channel VIVA nominate Moonspell as the revelation band of the past year, and made a large special program about the band.

SIN/Pecado, was their fourth album, released in 1997, and was not as it was expected by the fans. Moonspell was growing, and experimenting new sounds, that they couldn’t afford in the past. Even so it was a mark in their career, and a prelude to they’re (back to the roots), and the album that do that was THE BUTTERFLY EFFECT in 1999, and it was a big success. The sound was powerful, and the environment was breathless. Moonspell was in the right way, and getting more fans than ever, and the album sold very good, bringing a little more exposure to Portugal.

The latest album so far, DARKNESS AND HOPE, almost three years later, 2001, since the last one, is a promissing album, witch contains the first single released Nocturna, and contains Os Senhores da Guerra, a remake from Madedeus witch promises.....

But other experiences was made for Fernando Ribeiro, or Langsuyar, in 1998, as he record a album called Hermeticum, from DAEMONARCH, on solo. The sound is a Moonspell more violent with influences from Cradle of Filth, and Amorphis, but as it was expected the Moonspell are in first plan and we hope it continuos like that for many years. History is being made by them.... 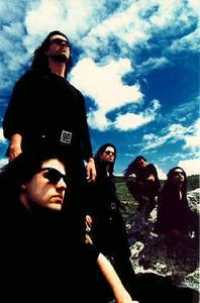