Moenia is a mexican electronica/synth pop/ambient/alternative rock/rock en español group, often compared to Erasure, The Cure and Depeche Mode. Popular within the Latin club scene, Moenia has had three top-20 hits. The band cites Kraftwerk, Depeche Mode and Jean-Michel Jarre, among others as their influences.

Moenia’s latest album, Stereohits, is a compilation and interpretation of successful 80s and 90s latin hits such as “En Algun Lugar” by Duncan Dhu, “Tren Al Sur” by Los Prisioneros, and “Ni Tu Ni Nadie” by Alaska Y Dinarama. The album was originally intended to be something that kept fans content while the group worked on their next album but became so popular that it was soon followed by a tour. 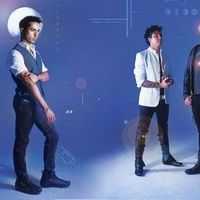