Born 24 July 1946, Avignon, France. It was convenient, if inaccurate, for the media to brand her a second Edith Piaf, but Mathieu shared a similar poor upbringing. One of 13 children of a stone mason, she used some of her factory wages for singing lessons, until she was noticed by one of Johnny Hallyday's former managers, Johnny Stark. He groomed her for stardom via an "urchin" hair style by Elrhodes and, from celebrated couturier Louis Feraud, trademark red-and-black stage costumes. A showcase at the Paris Olympia led to a deal with Barclay Records and a run of hits that began with "Mon Credo" in 1965. After this and later singles such as "C'Est Ton Nom", "Qu'Elle Est Belle" and "Funambule" sold over a million collectively within Europe alone, the organization directed its gaze overseas. While a domestic television spectacular (directed by Fran‡ois Reichenbach) served as a grassroots holding operation, the artist's appearances on networked US shows (hosted, respectively, by Ed Sullivan and Andy Williams) established vital links with that lucrative market. During the same lengthy world tour, Mathieu was even heard in concert in Moscow where she sang "Quand Fera-T-Il Jour Comrade", Gaston Bonheur's tempestuous anthem commemorating the October Revolution. Her impact on Britain was less tangible, though healthy sales of her 1968 album indicated a deeper groundswell of support than was evidenced by a solitary entry in the singles Top 30 the previous Christmas with a French interpretation of Engelbert Humperdinck's "The Last Waltz". Later, Humperdinck stole UK chart honours with his cover of Mathieu's "Les Bicyclettes De Belsize'. Both vocalists were featured on 1972"s Top Star Festival, a charity compilation of international entertainers on which Mathieu performed "Where Do I Begin" (from Love Story) - a rare genuflexion towards English-speaking listeners from one who had achieved global fame with a recorded repertoire which was invulnerably French, no matter what language the actual lyrics she sang. 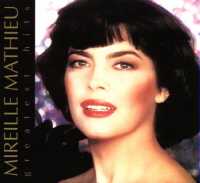