Once upon a time in galaxy far away..in a place called new york-there were four beings-two girls(kitty & Lyn Z),a boy(Steve),and a ferret(Jimmy)...they got together and decided they wanted to start a band...and thus began the neverending road to pure stupidity. Mindless Self Indulgence is so fucked up it'll make your head spin and then do the hokey pokey!

Mindless Self Indulgence is what you will be called when the music that you make has no chance in hell of getting you laid,or of making you seem cool in the eyes of your p.c. restrained,cookie cutter catagory demanding,humorless peers. It is also a four piece band of co-ed punks from N.Y.C.,whose name manifests itself during their live shows. Their music is a hybrid of Atari driven(the computer not the group),Industrial,New Wave,Soul,Jungle,Hip Hop,and Punk with a venomous splash of Attention Deficit Disorder....aka... "industrialjunglepussypunk"

See & hear Mindless Self Indulgence live. Why? Because they rarely suck live, but when they do, they suck with conviction! 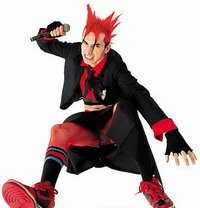