Actress, singer. Born Destiny Hope Cyrus on November 23, 1992, in Franklin, Tennessee, she is the daughter of '90s country star Billy Ray Cyrus. Destiny Hope changed her name to Miley after the nickname she was given as a baby because she was always smiling. She is best known for her role on the Disney series Hannah Montana.

Cyrus grew up on the family farm near Nashville with two siblings and three half-siblings. She was passionate about acting from a young age, appearing in her father's TV series Doc and in Tim Burton's Big Fish.

In 2004, Cyrus beat out 1,000 hopefuls to land the starring role of Miley Stewart in the hit Disney show Hannah Montana. The tween series features a young pop superstar (Montana) who hides her celebrity identity to be an everyday teen in real life (Stewart).

To accommodate filming, the entire family moved to Los Angeles, California, in 2005; Billy Ray plays her fictional dad-manager on the show. Cyrus released a successful Hannah Montana soundtrack album in 2006.

In 2007, her double album Hannah Montana 2: Meet Miley Cyrus launched a Best of Both Worlds tour. The concerts sold out in record time, and the show was extended by 14 dates to help placate disappointed fans. Her successful 3-D concert film collected $31.3 million in its opening weekend in February 2008. Cyrus is also a spokesperson for Daisy Rock Guitars and has her own clothing line, and it has been reported that she earned $18.2 million in 2007.

Cyrus changed her legal name to Miley Ray Cyrus in 2008. That same year, she found herself in the midst of a controversy for posing for revealing photographs taken by famed photographer Annie Leibovitz, which appeared in Vanity Fair magazine. The resulting criticism and media frenzy did little damage to her career, however. Her album, Breakout (2008), was a huge hit, reaching the top of the pop album charts.

In early 2009, Cyrus provided a look into her life with the autobiography Miles to Go. The book features previously unseen photos, family stories and "a look at her inner circle of loved ones." "I am so excited to let fans in on how important my relationship with my family is to me," Cyrus said in a statement. "I hope to motivate mothers and daughters to build lifetimes of memories together and inspire kids around the world to live their dreams." In 2010, Cyrus starred in the film The Last Song based on a novel by Nicholas Sparks.

Enthusiasm for her television alter ego remains strong as well. In April 2009, Hannah Montana: The Movie scored at the box office, bringing in more than $79 million. Cyrus followed that with the release of an album titled Can't Be Tamed in 2010.

The young superstar has also made headlines for her romantic life. In June 2009, she reunited with former boyfriend Nick Jonas of the musical group the Jonas Brothers. Cyrus was also previously linked to model Justin Gaston, and actor Liam Hemsworth. 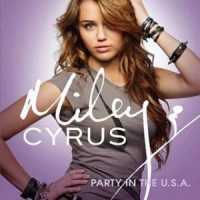