Christian recording star and Yamaha artist Michael W. Smith was the top honoree at the 30th Annual Dove Awards on March 24, carrying away six awards to bring his lifetime total to 22. The Dove Awards, presented by the Gospel Music Association, is the longest-running and most prestigious awards show in the gospel music industry.

Smith was named Artist of the Year and Producer of the Year; received two honors, one as an artist and one as a producer, for his current hit album "Live the Life"; and garnered separate artist and producer nods for his participation in "Exodus," a special-event album. For his performance at the awards ceremony, Smith used his Yamaha CPX15W Compass Series electric-acoustic guitar. On tour and for studio applications, the multi-instrumentalist uses an arsenal of Yamaha musical instruments, including the EX5 synthesizer, P200 digital piano and Disklavier® DGT7 piano.

"Yamaha has always made my favorite pianos," Smith said. "They now make guitars I love. The new Yamaha guitars feel great, sound amazing and offer some unique finishes that make a statement before you play a note."

"We congratulate Michael W. Smith not only for his outstanding achievement at the Dove Awards, but for his ongoing track record of great music with a positive message," said David Bergstrom, director of marketing, Combo Group, Yamaha Corporation of America. "Michael's long association with Yamaha is extremely important to us, and we are pleased that he has chosen Yamaha as both his guitar line and his keyboard line."

In 1998, Smith produced "Live the Life" and "Exodus," joined Amy Grant on her 21-city Christmas tour and visited 45 cities on his own "Live the Life" tour. He was a featured performer during the 1998 Miss America Pageant, and four songs from "Live the Life" --the title track, "Love Me Good," "Never Been Unloved" and "Missing Person" --all reached number one on Christian radio charts. With 5 gold records, 1 platinum record, 22 Dove Awards, 2 Grammy® Awards and more than 7 million sales to his credit, the talented artist is currently in the studio working on his 13th album. 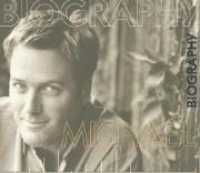