If one was to make a musical time capsule of 2007 – a collection of sounds and lyrics reflecting the energy of our moment – it might be a good idea to drop in a copy of Metro Station’s eponymous debut record. Sure, the band is young (ok, still in fake ID territory), but Metro Station’s brazenly catchy dance hooks and yearning lyrics perfectly capture what it feels like to be a teenager in today’s culture.

This is a band that was weaned on and made by the Internet, whose dedicated legion of online fans made them MySpace stars in a matter of weeks. This is a band that caught the early attention of Alternative Press (earning a spot as one of the magazine’s “22 Best Underground Bands”), along with URB and Teen Vogue magazines, months before they signed to a label. Metro Station is a band that, despite their youth, have made their way from greasy mall jobs to recording with Motion City Soundtrack in the same year. They are truly a product of their times and their generation, and they are ready to take advantage of it.

Part One: The Band

Metro Station formed in three stages, Trace and Mason met in Hollywood in early 2006 on what can only be deemed a “blind rock date” set up by their mothers. Trace and Mason, who relocated to L.A. from Nashville and Dallas respectively, were seeking like minded musicians to collaborate with. When they finally did meet, it was not an immediate fit. “I had never seen anyone like Trace before,” Mason admits. “He had all these lip piercings and tattoos and went to rock clubs. I just sat in my room in a big hoodie writing songs on my guitar.”

When they started writing together, however, something clicked. “We put a song down and connected on a different level,” recalls Trace. “That’s why we’re best friends now. We want to capture the same things in a song. Our music is all about being young and wanting more from life, and on that wavelength, Mason and I related from the start.”

That sense of yearning, of wanting to connect, is an essential part of Metro Station’s sound, and the impetus behind their name. “We’re from all over,” notes Mason, “And we’re transitory. That’s what it’s like to be a teenager - to want to escape and find your place. That’s who we sing for.”

The band found its place (and its name) when Trace and Mason found synth player Blake, who collaborated with the two on their first single, “Seventeen Forever.” With the addition of Blake’s pumping lo-fi sound, Metro Station found their niche. “Seventeen Forever” is at first a pop song reminiscent of 80s electro, the synthesizer beating like a pulse while Mason and Trace’s harmonic vocals soar above. Underneath the catchy vibe, however, lies a darker tone. The chorus reminds listeners that “we won’t be seventeen forever, but we can get away with this tonight,” expressing the fleeting sense of freedom that comes with growing up.

“Seventeen Forever” shot up to the top of the MySpace unsigned charts, where the band caught the eye of several major labels, as well as seasoned drummer Anthony. Anthony played one seamless set with the band as a trial, and fit in so well that they “had to have him immediately.” Now a four-person team, Metro Station was set to confront the fact that they had become Internet stars almost overnight.

“We were on MySpace three months before we hit the charts” says Trace. “And when that happened, we were like, oh my god, this could really happen for us. Before that it had all seemed unreal.”

“The fans did everything,” recalls Mason. “We never went out looking to play shows or gain publicity, but we did because of our amazing fan base in L.A. These kids would help us book shows and then make the flyers themselves for us to post up. It was kind of insane, actually. It just steamrolled.”

The band did not go out looking for shows, but early on, they scored some major appearances. First, they performed a show at The Echo, where a little-known musician by the name of Beck just happened to be opening for them. “It was a secret show for him that sold out,” says Trace. “We showed up and there was Beck. He used our equipment to play and we went on right after. We had only played ten shows at that point, but it was one of our best nights yet.”

The band has also performed with IMA Robot and as part of a coveted South By Southwest showcase for The Viper Room. Even with less than thirty shows under their belts, their live act is already making waves among fans. “We want our shows to be like giant parties,” says Mason. “We let everyone get on stage and feed off the energy. It’s the biggest rush.”

Metro Station signed to Red Ink in late 2006 (after an intern discovered them – where else?—on MySpace) and recorded their album in New York City this spring. Warped Tour veterans Motion City Soundtrack produced two tracks, “Kelsey” and “Comin’ Around” off their debut album, and the band worked on the remaining tracks with celebrated producers Sam Hollander and Dave Katz (Gym Class Heroes, Boys Like Girls). They are also signed to Crush Management, following in the footsteps of bands like Fall Out Boy and Panic! At the Disco.

“It’s been less than a year, so I can’t even wait to see where we are at a year from now,” says Trace. “I remember quitting my job at the mall and thinking, I’m only going to make music with Mason from here on out. That’s what I want to do.”

“People are going to give us flack for being so young and this all happening so fast,” admits Mason. “But we’re doing everything we ever wanted to do. We want to be on the radio. We want to play for our fans. If nothing else, we’re eighteen years old and carving out our own lives. What isn’t exciting about that?” 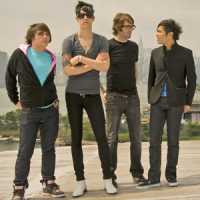