1980- Kurdt Vanderhoof starts a band that he names "Metal Church" (named after the alias given to his apartment where he and his friends worshipped at the altar of heavy metal) in San Francisco. Lars Ulrich is considered as Metal Church's drummer, but he ends up moving to L.A. instead. Nothing much happens with the band, so Kurdt moves back to his hometown of Aberdeen, Washington.

1981- Kurdt forms a band in Aberdeen called "Shrapnel" with some friends from high school- Kirk Arrington on drums, Mike Murphy doing vocals, and Craig Wells handling guitar. Kirk has a friend by the name of Duke Erickson who plays bass, so he is brought in to complete the Shrapnel line-up. Mike Murphy ends up leaving Shrapnel and joining the band "Rogues Gallery", so Craig brings in his friend David Wayne to take over lead singing duties. Shrapnel plays mostly metal cover tunes around their hometown, doing pretty much any gig they can get their hands on... school dances, local bars, with the occasional wedding thrown in.

1984- They start writing original material, and Metal Church gives their first concert on May 4th at the D&R Theater in Aberdeen, with opening acts Rogues Gallery & The Melvins. Metal Church puts out a self-titled debut album on the independent label Ground Zero.

1985- The album sells well, Metal Church is picked up by Elecktra Records, and goes on their first tour.

1986- Metal Church releases "The Dark" and tours with the guy who was originally considered to be their drummer, Lars Ulrich, and his band Metallica.

1987- Kurdt steps down from recording and touring with Metal Church, but stays on as the band's songwriter. He is replaced by John Marshall on guitar.

1993- Metal Church releases "Hanging in the Balance" and tours to support it, but the musical climate in America changes... suddenly metal isn't cool anymore... and Metal Church disbands, with each of the band members going their seperate ways.

1997- Kurdt and Kirk join forces to build a studio they dub "The English Channel". The band "VANDERHOOF" is formed, they release a self-titled CD, followed by a European tour with Savatage.

1998- The founding members of Metal Church hook up to put together the official Live album using some recently discovered tapes from Metal Church's heyday in the 80's. In the process, the band members get re-acquainted and decide to make a new studio album. During the early stages of putting the material together, Craig Wells backs out and John Marshall comes back on board.

1999- Metal Church releases "Masterpeace" and tours Europe for a couple months. Duke is unable to tour due to his family, and Kirk is also detained and unable to tour. In order to fulfill touring obligations, VANDERHOOF drummer Jeff Wade and bassist Brian Lake are brought into Metal Church.

2002- Kurdt finishes the new VANDERHOOF album, "A Blur In Time", and he and John begin the writing process for a new Metal Church release. More details forthcoming as they unfold.... stay tuned! 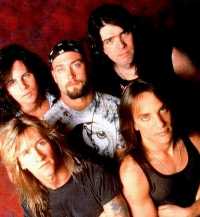