Maverick country singer Merle Haggard represents an unusual intersection in American music, a crossroad where folk, pop, jazz and blues traditions are used to create his own soul-baring form of expression. With an impressive 39 #1 country hits, numerous awards (Grammy, CMA, ACM, and BMI have all acknowledged him), the 63 year old Haggard has always set his own trends: he's the only country performer ever featured on the cover of jazz bible Downbeat; the only California born singer in the Country Music Hall of Fame; and the only artist who's done stints both as an invited entertainer at the White House and in San Quentin's infamous solitary confinement "hole" -- clearly a powerful, creative force.

Haggard remains an uncompromising artist whose work relies upon the honesty and purity of his vision, not the obligations of being a country star: "I don't like all of country music," he has said. "In fact, I like very little of it."

Despite the flag-waving aggression of his 1969 number one hit "Okie From Muskogee," Haggard has produced elegantly crafted, moving songs with a consistency that ranks him solidly alongside such renowned talents as Bob Dylan and Woody Guthrie. The quality of his writing transcends all boundaries; his songs have been recorded by a wide variety of rock & rollers, from the Grateful Dead to Elvis Costello, a fact that underscores Haggard's appeal and his staunch refusal to recognize any restriction imposed by public perception. Haggard is the ultimate underground anti-hipster. Born in a converted boxcar in Oildale, California, by adolescence he was wandering as far as Texas, beginning a pattern that ruled his life for over a decade: arrest, incarceration, escape, re-capture. Classified an incorrigible (the fruit of his escape artist reputation), he wound up doing hard time in San Quentin. After his 1962 release, thoughts of solitary confinement and the prison yard death of a friend made him realize what a mess he'd become and Haggard, who'd been singing and playing guitar for years, finally turned to a career in music.

By 1965 he was signed to Capitol Records and began scoring a string of hit records, hard-boiled classics like "Lonesome Fugitive," "Branded Man" and "The Bottle Let Me Down." Eventually winning a full criminal pardon from then Governor Ronald Reagan (it's on permanent display a the Country Music Hall of Fame), Haggard positively roared through the music business, brawling, boozing, getting high ("Son, Muskogee is the only place I DON'T smoke it," he said in 1974) with an unstoppable fervor. His creative drive is equally formidable -- he reassembled Bob Wills' Texas Playboys for a final recording session with their old boss, but only after mastering the fiddle, a previously unfamiliar and physically demanding instrument -- and he managed it in a incredible six months flat.

On his new album "Roots", Merle perfectly captures the style and mood of classic '50s Country. "Roots" is an elevated form of musical expression with a presence of his own, and the Strangers, particularly steel man Norm Hamlet, pianist Doug Colosio and fiddler-mandolinist Abe Manuel Jr. have risen to the occasion with an equally reverent restraint that's resulted in a mix of creative rediscovery and pursuit of simplicity. 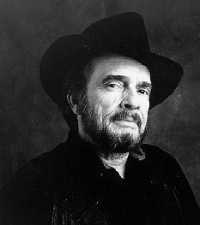