"Our aim is to make music that the entire world, every age and nationality can relate to. We want people to be encouraged and uplifted when they listen to our music."

"There is versatility in the subject matter and the new record reflects our growth as singers and songwriters," says Tina. "The first album was very personal," agrees Erica. "This time, we also addressed wider issues: we're extending what we did last time."

Working once again with super hitmaker Warryn Campbell (known for success with such artists as Luther Vandross, Sisqo, Kelly Price, Brandy and others) on most of the album (with the exception of "He Said," produced by Rodney Jerkins), the members of Mary Mary have created an album that is filled with edgy grooves and soulful ballads while maintaining the integrity of the duo's spiritual message. As a prime example, there's "Trouble Ain't," which Erica says, "expresses the idea that things will change even when you don't think they will." Equally potent is "In The Morning," which is much in the flavor of "Shackles," the song that took Mary Mary to the upper reaches of the charts the world over from the U.K. to Australia.

Incredible is filled with musical standouts: in addition to a poignant reading of Stevie Wonder's "You Will Know," the original material co-written by Mary Mary with producer Campbell includes the joyful anthem "Hold On" and the heart-filled "I Try." Notes Erica, "I was driving in my car one day and this song just came to me. I called Warryn and started singing it to him and the next day, we were recording it. The song is a cry to God about how we all may try our best but sometimes, we don't quite cut the mustard. I know a lot of people will be able to identify with it."

One of the album's highlights is "Little Girl," a song with a powerful message of self-esteem. "Erica came up with the idea," says Tina. "It's really about not measuring yourself against others, knowing that you are beautiful, you are smart, you have your own greatness and uniqueness, that God created you as perfect. It's about loving your own individuality and embracing it." Erica adds, "The first verse of the song is personal because, you know, I used to think that I wasn't ever going to be what I dreamed I could be?"

Both Erica and Tina agree that many of their own dreams have been fulfilled in the short space of just one year and indeed, the upbeat title track of their second album accurately describes how the Inglewood, California, sisters feel about all that they've accomplished since the release of the critically-acclaimed Thankful. Born to gospel-singing parents in a family that includes five other sisters and a brother, Erica and Tina heard gospel music by artists like the Clark Sisters, Commissioned, the Winans, Shirley Caesar, John P. Kee, Rev. Milton Brunson and Hezekiah Walker from the very start. Along with their siblings, the sisters sang in the local church choir and were often given coveted soloist spots. After singing with the popular "Bobby Jones Gospel" show on BET, Erica and Tina were inspired to pursue musical careers.

In 1995, the pair were cast in the Michael Matthews gospel show, "Mama I'm Sorry," and followed it up with performances in another Matthews show, "Sneaky," touring the country performing before audiences who truly appreciated their vocal skills. While holding down day jobs--Erica at a local supermarket, Tina at a major department store--to pay the rent and complete college, the sisters found themselves constantly drawn to work in music. Erica began doing background singing on the road with Brian McKnight, Brandy, Terry Ellis and Ray-J while Tina sang with Eric Benet and Kenny Lattimore. While secular music helped pay the bills, Erica and Tina's deeply-held personal beliefs found even greater expression in the inspirational songs they began writing together.

In 1996, the pair met producer Warryn Campbell, who had also grown up steeped in the tradition of great gospel music. Suitably impressed, Campbell started writing with the sisters and took the material along with the pair's original demos to EMI Music. As a result, Erica and Tina found themselves with their own publishing deal: "Dance," a tune they wrote and performed with Robin S., was added to the best-selling soundtrack for the film, "Dr. Dolittle." Further opportunities to showcase their songwriting skills came with the inclusion of the song "Let Go, Let God" in the inspirational soundtrack for "The Prince Of Egypt" and a recording by girl group 702 of another Atkins' original "What More Can He Do." When gospel great Yolanda Adams, one of Mary Mary's musical inspirations, recorded two songs--"Time To Change" and "Yeah"-- for her platinum album Mountain High Valley Low, the sisters felt they had been truly blessed.

It was only a matter of time before the sisters' songwriting and vocal talents led to a major record deal. In 1999, the pair signed with Columbia Records and became one of the first gospel duos to be signed with the label. As Mary Mary, the duo's musical direction was clear: "Gospel tells you about what God can do, it tells you the good news of Jesus," says Erica. "Because our music is so hip-hop and has an urban feel, a lot of people think, 'Oh it's inspirational, it's contemporary.' It can be. But listen to what we're saying in our songs which tell the message of Christ specifically."

With producer Campbell at the helm, the duo crafted a groundbreaking album that drew immediate critical raves and an excited response from music buyers everywhere. Thankful earned Mary Mary a slew of accolades including a Grammy for Best Contemporary Gospel Album, two Dove Awards, three Stellar Awards and a Soul Train Award. Just as exciting was the reaction outside the U.S.: the single "Shackles" was a Top 10 pop hit in the U.K., France, the Netherlands and Australia . "I remember the first time we went overseas," recalls Tina of a huge stadium show in Holland. "Seeing 60,000 people singing Shackles' along with us was absolutely amazing!" For Erica, attending the "Lady Of Soul" music awards in the fall of 2000 was another milestone in a year filled with accomplishment: "Our music came on and everyone was on their feet. Knowing that people from all musical genres were enjoying what we were doing was so gratifying."

Incredible reflects that power and glory. As co-writers of almost all of the songs on the stunning new album, Erica and Tina are justifiably proud of their latest project and the message they are conveying as contemporary young gospel artists. "When people see the covers of our albums, we sometimes hear them say, 'you don't look like gospel singers.' Well, we want to show that you can be a Christian in the music business and represent!" says Tina. "You can still be fashionable, wear your hair and clothes in a hip way and deliver the message." And, Erica adds, "We want to show that with all the provocative, sexual images for young people in the music industry, everything doesn't have to be 'bootys' and Bentleys! Young kids need to know that it's hard work to make it in the music business but you don't have to be wild and weird to succeed."

Without any doubt, the success Mary Mary enjoyed with their auspicious first album is sure to be exceeded with their new release. From the funky groove of "God Bless" to the rousing "Thank You" (a Hawkins Singers song) which features a full choir and a live performance by the Reverend James Moore, Incredible resounds with a universal spiritual message that is sure to touch, move and inspire audiences everywhere. "God is good and we are so thankful for His many blessings," the sisters state. "We're just want to use our music to share the good news!" 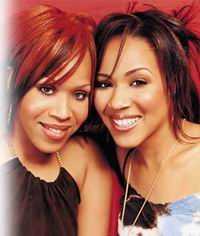