The breathtaking soprano of Martina McBride is one of the greatest vocal instruments in contemporary popular music. That she applies it to songs of uncommon integrity makes its impact all the more thrilling. The proof is presented on her landmark Greatest Hits collection. This super-sized serving of music offers 13 of the performances that have made her one of the most cherished artists in country music, revives one of her favorite prior album tracks and offers four new recordings that place her at the forefront of the style in the new millennium.

“I’d like to be known as someone who records songs that are intelligent and emotional,” says Martina. “I don’t want to be thought of as ‘fluff.’ Night after night, you have to be able to stand up there and believe in what you’re singing. And I’m really lucky -- I still love everything that I have done. I think I have chosen well.”

Indeed. With a catalog that includes such chart-topping singles as “Wild Angels,” “Wrong Again,” “A Broken Wing” and “I Love You,” Martina McBride has surely “chosen well.” The CMA’s 1999 Female Vocalist of the Year has one Gold album, three Platinum CDs and one Triple Platinum collection to demonstrate her extraordinary talents in choosing songs with depth and delivering them with chest-pounding intensity.

What is even more impressive is that her best work appears to be in front of her. The new songs on the Greatest Hits package seem to detonate a fresh explosion of creativity from this artist.

“When the idea for this album first came up, I really struggled with it. I thought, ‘Wait a minute: Nobody’s going to perceive this as some kind of an end, are they?’ I’m far from done. When I realized that I could put on four new songs, it was a big help to me, creatively. That made me feel like I wasn’t ‘closing a door;’ I was opening one. I think this album puts some space between what I have done and what I am going to do in the future. I loved the fact that we could put lots of hits on it, but also that it was saying, ‘Now let’s see what the next 10 years hold.’

“I can’t wait to get out and sing the new songs for people. I think that ‘When God-Fearin’ Women Get the Blues’ is really a breath of fresh air. The woman in this song is so feisty. I think people are really going to like her. I’m really excited that it is the first single. We’ve made a video for it that’s really fun, as well.“There’s a new song called ‘Blessed’ that feels like something I could have written for myself. Before I found the song, I’d say all the time, ‘I’m so blessed,’ because I truly feel like I am. I was given this gift of music. Not only that, I was given a safe and happy upbringing. I was given the intelligence to be articulate, most of the time. I have my beautiful family. And best of all, I was given the gift to be able to enjoy this, realize what it is and not take it for granted.

“The ballad ‘Where Would You Be’ is very uncharacteristic of me, lyrically. I see that song as very vulnerable and very raw. This woman has these doubting questions, and yet she has the courage to talk about it. Is he here or not here? She brings it up, and that’s what makes it so emotional.

“When I first heard ‘Concrete Angel’ I couldn’t get through it -- I cried every time I listened to it. I love lyrics that are true and honest. And this tells a story of child abuse. It opens your eyes and opens your heart and makes you want to do something to make a difference. Hopefully, it will have that effect on people when they hear it.”

Martina McBride doesn’t seek out songs with messages deliberately. Like a true artist, she responds to songs on a gut level. If they derive their emotional impact from social problems, so be it.

“I never go into the process of picking songs by ‘thinking.’ I go into it just listening and feeling. I never think, ‘I’ve got to find a song about this or that,’ or ‘This song’s got to appeal to so-and-so.’ When one hits me, it’s simply a gut reaction. Then I just hope that it will strike a chord with somebody who feels the same way I do.”

By nature shy and demure, Martina was raised on a music-happy Kansas farm and graduated from high school in a class of 10. When Martina and her husband John McBride moved to Nashville in 1990, neither one was particularly sophisticated. He used his skills as a sound technician to build Music City’s most successful concert-production company. She coupled her spectacular vocal ability with laser-sharp emotional instincts to become a performer with both massive popularity and critical respect. In the process, the songs led her to awareness and social sensitivity.

The anti-alcohol message of “Cheap Whiskey” led to a 1992 video with a don’t-drink-and-drive message. Her top-10 breakthrough a year later came via “My Baby Loves Me,” a positive lyric where a woman is accepted for who she is, no matter what her appearance or mood.

“That song is about unconditional love,” says Martina. “I think it’s important to talk to girls before they even start dating. My older daughter Delaney is 6, but she’s a very aware child, and we already talk very openly. I tell her, ‘The most important thing is that the boy treats you good.’ Then I explain what that means.”

Martina describes the story of “Life #9” -- which hit the top-10 in 1994 -- as being about confronting a wandering guy, “in a creative and interesting way. It’s about a woman who says, ‘You’re on your last chance.’”

But 1994’s “Independence Day” was unquestionably, “the song that changed my life,” she says. This harrowing tale of domestic violence opened Martina’s eyes to a problem that exists on all levels of society. On her concert tours, she began visiting high schools to talk to young women about self-worth. She took the reins of the annual YWCA Celebrity Auction at Nashville’s Fan Fair festival, which raises funds for a domestic-violence shelter and other programs aiding women.

She now serves as the national celebrity spokesperson for the National Network to End Domestic Violence. A third of all women murdered in the U.S. are killed by husbands or boyfriends. Women ages 16 to 24 experience the highest per capita rates of violence at the hands of their men. Awareness cards that pinpoint signs of an abusive relationship -- and offer five ways of approaching someone who seems to be in such a situation -- are passed out at Martina’s concerts.

“About a year ago I thought I wanted to get more involved with a children’s organization,” comments Martina. “But then I realized this is a way I can help children. This is an issue about our daughters and sons. The cycle of violence can be broken through education. The other day, Delaney and I had a conversation about the different kinds of abuse. I said, ‘You know, it’s not just when somebody pushes you or hits you. There’s another kind of abuse called emotional abuse. That’s when somebody makes you feel bad about yourself or calls you stupid or makes you feel like you’re no good. That’s not respectful. Daddy wouldn’t talk to me that way; I don’t talk to Daddy that way. You don’t deserve to be talked to that way.’ Nobody does.”

Martina addressed this issue in her 1997 smash “A Broken Wing,” which is about a woman escaping emotional abuse: “That woman is alive and well and working in a mall someplace,” she smiles.

Martina McBride’s startling power with heartache lyrics is undeniable. This was perhaps no better illustrated than in her torrid, goosebump-raising performance of “Strangers,” which she feels to this day should have been her follow-up single to “Independence Day.” She was overruled back in 1994, but insisted that this exceptional track be revisited on Greatest Hits, adding value to an already outstanding collection.

There have been many other opportunities to prove how stunningly effective she is with such material. The 1998 hit “Wrong Again” found the singer languishing in despair. A breakdown in communication between lovers created the anguish in 1999’s “Whatever You Say.” Later that year, the propulsive “Love’s the Only House” found her revisiting social issues.

But the singer has enjoyed equal success with joyous lyrics. “Safe in the Arms of Love” (1995) and “Wild Angels” (1996) were both proclamations of romantic ecstasy. The deliriously upbeat “I Love You” spend five consecutive weeks at No. 1 in 1999 and was included on the million-selling soundtrack of the Julia Roberts film Runaway Bride. The soaring top-10 success “There You Are” appeared on the soundtrack of Ashley’s Judd’s silver-screen feature Where the Heart Is in 2000. Martina’s 1998 hit “Happy Girl” poetically contrasted a woman’s sunny present with her downbeat past. All of these are revisited on the Greatest Hits compilation, as is 1997’s sweetly sentimental “Valentine,” a collaboration with pop pianist Jim Brickman.

“I’m always surprised when I find out that people outside of country music know who I am,” she says. “I kind of walk in assuming that they don’t.” Teen-pop sensation Britney Spears declared herself a devotee at this year’s American Music Awards. Professed fan Bob Seger eagerly agreed to duet with her on the multi-million selling soundtrack of the Sandra Bullock movie Hope Floats. And Martina McBride was the first country artist chosen for the landmark, all-female “Lilith Fair” pop tour of 1998.

“That was a life-changing experience for me. I never knew a tour could have that much camaraderie. The whole vibe was really cool, and I wanted to have that again.”

Earlier this year, she and her idol Reba McEntire discussed creating something similar for country performers. The result was “Girls Night Out,” an all-female country blockbuster tour, which teamed Martina with Reba, Sara Evans, Jamie O’Neal and Carolyn Dawn Johnson. Both Delaney and daughter Emma, 3, were along, as were other singers’ children. Martina says she’d like to continue the concept in years to come. And since her close friends range from Faith Hill to Loretta Lynn, casting the tours shouldn’t be hard. The noteworthy thing is perhaps the evolution of the woman who spearheads them, for Martina McBride has grown remarkably from rural ingenue to principled leader during the time period her first Greatest Hits album surveys.

“There are times I feel like a ‘star,’” she says. “But more often, I just feel like I’m successful and happy. I don’t have a desire to be on the cover of every magazine. I want to be able to raise my kids in a way that’s sane and normal. That’s my priority. And as long as I have that, whatever else I accomplish is icing on the cake.” 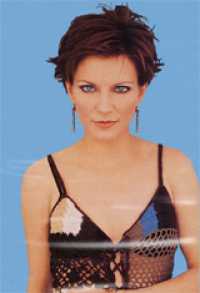