Markoolio, born Marko Lehtosalo, is ethnic Finn who lives in Sweden who raps in Swedish.

His breakthrough was the album “Markoolio sticker hårt” which produced several successful hit singles, such as “Vi drar till fjällen” and the infamous “Bira-låten”, his tribute to the fantastic beverage that is beer. The lyrics on this album are humorous, dealing with as above mentioned beer, girls, clubbing, partying and his longing for Finland.

Apart from music Markoolio has been involved in different shows and television programmes, like “Dr.Mugg”(Bad Guy have a gun that shoots toiletpaper mugg= Toilet) “Bröderna Fluff”(Yet again a bad guy.) These shows are for kids, and older people that whant to laught abit at stupid shows ;D. 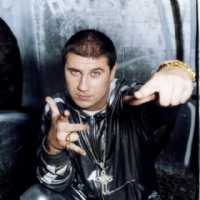