I'm a bit sick of looking at that stock-form bio (no offense, gabe), so I thought I'd just write something else..... I was born in london, and then my mum (she's great, you would love her) moved us to new york when I was eight. before she moved though, her and my dad would throw tea-parties at their house in st. john's wood and I (3 or 4 yrs old at the time) would sit, eating crumpets & playing air-drums next to the stereo speakers. drums was my first instrument, I have since laid them to rest...... skip to nyc, I started a band in high-school (playing guitar) and I listened to alot of good music (not to be confused with g.o.o.d music--g'day 'Ye). then the brand new heavies came along and I found the funk aswell..... I started dj'ing in '93 in downtown NY clubs, for whomever had five dollars. at some point, i got good and started to build a nice rep. around the same time, "urban music" (I borrowed that term from one of my college textbooks) got very fabulous, so alluvasuddden, it's like well-blinging. then, the fashion world decided hip-hop was zuper-cooo-el, so I milked that for a bit, dj'ing gucci parties in milan (where I got in a shouting match with charlize theron--I'm usually a very peaceful person, like jehovah's witness-peaceful) and a pair of puffy parties in paris (try and say those last seven words 10 times fast)..... then I hooked up with nikka costa (thanks dom), and me and her husband justin produced her criminally slept on debut album ("like a feather", respect game). that led to my debut album on Elektra (rip), "here comes the fuzz"--which kind of bombed in the US, but gave me a nice top 10 around the world with "ooh wee" (top of the pops, thanks for the memories)....... hooked up with rich kleiman and started Allido Records, which will release chicago superstar Rhymefest's record this summer and australian wunderkind Daniel Merriweather next year. we're also putting out the soundtrack to "Half Nelson" (a really good movie with Ryan Gosling) and a series of rocking compilations for the Hard Rock..... I still love dj'ing (and you can hear me most fridays on my east village radio show (hello Echo) but I'm mostly producing records right now. I have some of my best stuff yet coming later this year--robbie williams, lily allen, amy winehouse, christina aguilera, rhymefest, domino etc.... and, of course, my upcoming album "VERSION" featuring the radiohead cover (hello, alex greenwald--may I have a call back, please?) and many many more joints......Stay Tuned 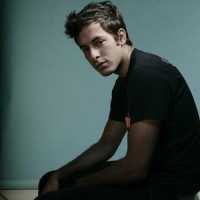