There are very few artists that can demonstrate versatility in both their musical range and vocal abilities. However, 23-year-old Marcos Hernandez has the talent and training to do both, and it happens to come naturally.

The handsome vocalist can easily switch music genres to cater to the mood of his audience whether it’s invigorating Pop, the rhythmic sounds of R & B or serenading ballads, Marcos’ debut CD, C About Me has something for everyone.

“I’ve been singing since I was born,” recalls the Mexican-American heartthrob who has an old soul he attributes to growing up on Motown. “We’d [Marcos and his three siblings— Monique, Leticia and John] would perform for our grandparents and every time we’d go to family gatherings, people would just expect us to perform. We were like the Mexican Sound of Music.”

Performing for friends and family would eventually turn into a lifelong passion. Born in Phoenix and raised in the Dallas/Ft. Worth area, Marcos made the conscious decision to go pro in his adolescent years. At a time when most kids are thinking about playing with video games, Marcos wasted no time in jumpstarting his calling. “About 12, my mom and dad gave me an ultimatum—football or music,” recalls Marcos, whose dad coached football and wanted him to take full advantage of his athletic abilities. A multi-talented Marcos went with the latter. “Football was not that big of a thing for me. I chose music.”

Marcos joined his junior high school choir and began formal vocal training. “I took vocal lessons from 12 to 18,” Marcos proudly recalls. “I went every week for nine months at a time. I trained with a vocal coach and voice teacher. One taught me how to sing and the other taught me what to sing. Both went hand and hand.”

Marcos developed his own personal style by listening to a variety of artists and music genres. His Latin upbringing exposed him to the traditional sounds of Mariachi, while Marcos also gravitated to the rhythmic sounds of Motown artists like Lionel Richie and Stevie Wonder, and the popular classic tunes on the Top 40 charts. “It was groups like The Temptations and The Platters,” Marcos recalled of his earlier inspirations. “Their songs had strong melodies and they sang them effortlessly It was all about the songs. These groups knew how to perform and deliver a song.”

Inspired by entertainers from “back-in-the-day” Marcos made sure to also focus on his showmanship. Every chance he could, he performed in front of an audience whether it was at a karaoke bar or local jam session. These opportunities prepared him to enter a local radio station contest judged by 106.1 KISS FM's Kid Kraddick who was putting together a boy band, which became the Dallas-based group, Sons of Harmony. “They were having a crazy contest at a mall for a boy band,” says Marcos. I was really nervous and one of the last people to sing. I got picked and we stayed together for two years.”

The first single from C About Me, “If You Were Mine” produced by Eliot Sloan, Robi Menace and Wayne Stalling is currently climbing the Pop charts. “ This album is a reflection of the music I grew up listening to. All the Motown stuff, 80s Pop and Rock as well as music I like today, “ says Marcos, whose debut album contains soothing, serene, tranquil, peaceful ballads alongside energetic and contagious dance tracks. I want my music to remind you of good times. I want my words and phrases to mean more than something cliché.”

Entitled C About Me, (a “pickup line” he uses when asking girls to come check him out,) exposes Marcos’ sensitive side and his true feelings about love, romance, breaking up and getting close. Upbeat and contagious rhythms like “Get Personal” and “Lovely Girl” become Marcos’ way of paying close attention to women with using compliments instead of aggressive behavior. C About Me has become Marcos’ flirtation anthem, while tracks like “Bitter Sweet”, address how twisted guys can get over sweet, attractive girls with sour attitudes. Confessions of love will ring true in devotional ballads like “The Way I Do”, “If You Were Mine”, “If I’d Known” (a romantic apology), “Call Me” (yearning to have someone close), “Best of My Love”, “Say” or “Endlessly” for inspiration. Better yet, set the stage for your tropical fantasy with cumbia/reggaetón track “Bailamos” or tropical pop track “Latin Escapades”. With a blend of Spanish guitar, soulful vocals and the influences of the music he grew up on – you get Marcos and C About Me. 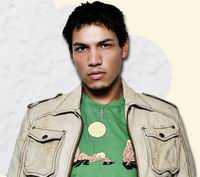