Manic Street Preachers returned as a three piece in 1996. The single, 'A Design For Life' hailed the (ever-decreasing) capabilities of the British welfare system, with its opening line, "libraries gave us power ". A tremendous ballad awarded an Ivor Novello songwriting award, it reached No.2 in the UK charts in April 1996. Their fourth album, 'Everything Must Go' captured and revealed the turmoil of the band's recent history and won them increasingly wider appeal (and their first two Brit Awards for Best Album and Best Band).

The fifth Manics album, 'This Is My Truth Tell Me Yours', took its title from the Welsh social revolutionary Aneurin Bevan, the architect of the welfare state. Its references included the Spanish civil war ('If you Tolerate This...'), the Hillsborough football disaster of 1989 (S.Y.M.M.) and the crash-and-burn nature of Welsh artists such as Richard Burton and Dylan Thomas ('Ready For Drowning'). Again, no ordinary record.

Leaving the 20th century, the most rock'n'roll place to be on the entire planet was Cardiff's Millennium Stadium... Manic Street Preachers then kicked off the 21st century by storming past the boy/girl-bands to the top of the charts with the single Masses Against The Classes - fuelled by no promotion, no video. Having set the tone of the current rock-friendly times, they promptly slipped out of the public eye, until now, that is. And it has been truly worth the wait...

Self-belief has always been a key element in the band's style: at the start of the 90s Manic Street Preachers had rattled the media by revealing their elaborate plans. They wanted to sound and to look more spectacular than any of their peers. They predicted huge sales and dramatic scenes. They aimed to engage both the heart and the intellect. The Manics aspired to equal the very best elements of their passionately maintained record collections. Many scoffed and predicted a sorry end, but Manic Street Preachers have since realised most of their grand ideas. While other acts have proceeded to sleepwalk through their careers, the Manics are ever-alert, consistently fierce, always thinking.

Manic Street Preachers burst onto a baggy-obsessed scene in 1989 with their debut single 'Suicide Alley'. They nourished themselves on the polemic of Public Enemy and the rock'n'roll excess of Guns 'N Roses, laced with the darker tones of Brit acts such as the Smiths and Joy Division. After a series of low key releases including Motown Junk' and 'You Love Us' they signed to Columbia and released a double album, 'Generation Terrorists'. The subsequent LPs, 'Gold Against The Soul' and 'The Holy Bible' were increasingly bleak and unflinching, especially the latter. In February 1995, the band's guitarist, Richey James went missing on the eve of an American tour.

Shortly before the album's release the Manics were the subject of a BBC TV documentary. The 'Close Up' presentation gave an illuminating insight into their past. The cameras travelled to the former mining town of Blackwood, in South Wales. It traced the fabric of the band, who were old childhood friends (singer/guitarist James Dean Bradfield and drummer Sean Moore are cousins), measuring their music against a backdrop of their formative years: the mid-'80s miners' strike, the politicisation of the region and the subsequent disenchantment when the strike was broken.

Manic Street Preachers featured strongly across the board in end-of 98 polls, heading many categories. Q magazine readers hailed them "Best Act In The World Today". A sold out arena tour in December '98 culminated in three rousing, pre-Christmas celebrations at the Cardiff Arena. In January, nominations for three Brit Awards (Best British Group, Best Album By A British Artist and Best Single By A British Artist)

In early 1999 Manic Street Preachers toured Australia, Japan and Europe, their stature has become truly international. They returned briefly to appear live at the 1999 Brit Awards and achieved a "double Double";- winning Best British Album for "This Is My Truth Tell Me Yours" and Best British Group, reprising their 1997 successes exactly and becoming the first band to win these most prestigious awards on consecutive albums.

Summer '99 continued with explosive, controversial appearances at European Festivals (including the headlining slots at Glastonbury, T In The Park and V99) and the band's first US dates for three years. True to MSP history, these provided a mixture of chaos, controversy and column inches...

By the end of 1999, Manic Street Preachers looked back on the most remarkable year in their career to date. The Manics had spent ten years provoking inspiration, love, hate, devotion, creating rock mythology and making history. Who else but the millennium band could take over the Millennium Stadium on the eve of the New Millennium? The video, "Leaving The 20th Century" (released March 2000), captured the glamour and the glory of the night.

The Manics are the people's band. This most legendary of the UK's contemporary rock acts, have more than once been called a national treasure. They return in Spring 2001 with a new album, single and tour. Despite their "year off", the UK media has continued to hang off their every word and eager speculation about the band's new material has generated continuous attention. Manic Street Preachers began their careers by verbalising their brilliance, and have long since surpassed the hype. More greatness arrives in March...

Manic Street Preachers first live airing of new material will be at the Karl Marx Theatre, Havana on February 17th followed by new releases in March 2001. They play their first UK dates since December 31st 1999 in March and April. 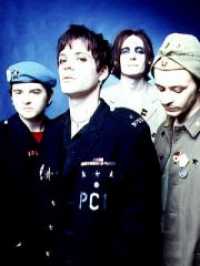