In-your-face n' off-the-streets: that's MADBALL. Spend some time 'round them and you'll know what makes this four-man wrecking ball tick. Freddy, Matt, Hoya and John: four distinct personalities who have honed their rage to a sound synonymous with the word Hardcore. Now, MADBALL step up the chemistry of their game up with this blur of belligerence, LOOK MY WAY.

LOOK MY WAY is pure New York Hardcore, loaded with crushing chords, bombastic breakdowns and brutal beats all topped off with Freddy's fed-up-n-not-takin'-it-anymore throatmanship. It's the MADBALL formula, he stresses. The old flavor with some newer grooves. It's evolved a little bit more.

With intents on point with MADBALL's origins in 1989 as side-band to Gotham hardcore leviathans and Freddy's older brother Roger Miret's band, Agnostic Front. Check the 1989 BALL OF DESTRUCTION 7" for some serious old-schooling. When Agnostic Front temporarily took themselves out of the game for a six year hiatus in 1991, guitarists Henderson, Vinnie Stigma and drummer Will Shepler drafted Freddy and bassist Hoya into the mix and promptly dropped the DROPPIN' MANY SUCKAS EP on a Hardcore scene quick to eat up MADBALL's violent mix of hardcore, punk and metal all topped off Cricien's beat-of-the-street lyrical POV.

It's pure Hardcore but coming from the same urban schooling as New York's other street-beat: Rap. We all like Hip Hop, says Freddy. There's a lot of similarities, especially in the lyrical content and some of the beats. We are pretty different musically but I think the message is the same: it's about being real.

MADBALL inked with Roadrunner in 1994 to produce '94's SET IT OFF and '96's, DEMONSTRATING MY STYLE. Those records, coupled with frantic world touring, have established MADBALL as one of the most uncompromising and fiercest live bands anytime, anywhere. Watching MADBALL sweating it out live at Holland's Dynamo Festival in 1995 in front of 100,000 fans was an especially awe-inspiring sight. It's funny to think that we've taken it so far and that other bands come up to us and tell us that we've influenced them, says Freddy. It makes me feel like an old man at 22!

LOOK MY WAY is MADBALL to the core. Now a four man team, Stigma back to work with Agnostic Front and Shepler replaced by ex-Mind Over Matter skinsman John Lafatta, it's the most focused and confident MADBALL disc to date. Rawer, harder and groovier than past records; the album's spirit and no-frills approach is a direct result of taking matters into their own hands; Matt Henderson taking on co-production chores with long-time friend and 454 Big Block/World Is My Fuse guitarist Dean Baltulonis at Boston's Salad Days Studios. For a month and a half in the dead of Winter, the band worked relentlessly. Or as Freddy characteristically states: We did what we gotta do.

And they did. According to Freddy, LOOK MY WAY continues the MADBALL tradition of us being real about our music and our lyrics. Cricien's bitter snarls ring with confrontation in the title track, and a newfound sense of soul-searching in the city that got no pity at the core of Been There, Done That. Living in the city makes you grow up a little sooner, Freddy admits. I think we've all gotten a little older, a little smarter. You learn to avoid certain situations a little more. The singer pauses for a second when asked about the band's street-tough rep. You hear the craziest things; like we killed an entire club or something! We've never been maniacs fighting in the street for no reason, but over the years you learn to stand your ground. I respect anyone who respects me you get it right back. You slap me in my face...

Our Family harkens back to DEMONSTRATING MY STYLE rendering the album's Nuestra Familia entirely in Spanish. Hoya and I are Latino, and that's something that's always been important to me, but it goes beyond that, Freddy states. We all come from different backgrounds but we've all been friends for a long time. Like family. Lessons of Life is more directly autobiographical. It's funny, I'm working now, says Cricien who currently works as a plumber. But I always end up leaving it to do this. At times I want to do it, sometimes I don't but I'm always back there. Back in the mix.

The goals this time around are as direct as the band itself. To get it out there to as many people as we can, explains Freddy. Already, MADBALL have an extensive US tour with Earth Crisis on the books and are setting their sights on Europe and the Far East. Now, people are telling me that this is our best record. They said that about our last one (DEMONSTRATING MY STYLE) and now they tell me that we beat that. That means a lot to me. I see the look kids get in their eyes when we play. It makes me want to do it even more.

MADBALL is back. Here's twelve songs from the mean streets that refuse to give in or give up. 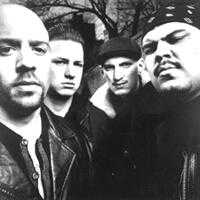