After five years of chart-topping hit singles and achieving platinum status, Mark Wills has taken his vocal talents to a new level of maturity and creative solidity. The Academy of Country Music's "Top New Male Vocalist" of 1999 (known for his genre-bending diversity with his interpretations of such R&B songs as "Back at One" and "Almost Doesn't Count") demonstrates with insight, ease and finesse that he is just getting started.

With the release of his new album, Loving Every Minute, Wills continues to show his natural ability to tell a story with his voice. The material on this project enables him to further hone his skill as a vocal stylist and narrator of everything that is great and hard about being human.

"It's like anything else - the more you do it, the more comfortable you get," says the performer, modestly. "I've never stretched vocally on a record before like I have on this one. I think you can hear that we really spent time on this album, and that, more than ever, I'm feeling connected to every lyric and every note on an emotional level."

Loving Every Minute unfolds as a collection of heartfelt songs, filled with universal themes to which we all can relate. The nicely constructed story song "One of These Days" lets him get inside its blue-collar characters while providing a soaring tenor chorus. "Back on Earth," revisits the lament of the traveling musician, where he sings of aching for a family he misses on the road. The swooning Latin-flavored arrangement of "Lost in a Kiss" gives him a setting to emote as a romantic balladeer.

The wonderfully sing-able melody of "Somebody" allows him to pour his heart into a tale of loneliness and longing as he addresses the fears and hopes of every single person who has wondered if there is really somebody out there just for them. Vaulting up toward the top of his tenor range in the mid-tempo romantic invitation "Love Can't" and on "In My Heaven" he uses urgency and idealistic punch to put across message songs that yearn for a better world. "I'll Be Around" has a vocal that is packed with personality.

Perhaps the most commented upon song is this collection is "The Balloon Song", which tells the bittersweet tale of a little boy pining for his mother who's passed away. Mark holds his heart in his throat for the inspirational ballad "Universe." "I Hate Chicago" shows a playful sense of humor that will entertain more than offend.

"Loving Every Minute," the collection's first single, fuses his earthy country vocal with some pop production touches. So does the lilting "I'm Not Gonna Do Anything Without You," his duet with labelmate Jamie O'Neal, who recently made her mark on the country charts with her breakthrough single, "There Is No Arizona."

That collaboration is one of several projects that have kept the young Georgia resident busy during the past year. In addition to participating on Jamie's CD, Wills also teamed-up for duets with Chad Brock and Lee Ann Womack, the latter on the Tom Sawyer movie soundtrack (for which he also did the voice of Huck Finn in this 2000 animated film). He has worked tirelessly for several charity events, starred in his own Showcase special on CMT, sang at the Miss U.S.A. pageant on CBS and collected Gold and Platinum awards for his albums Permanently and Wish You Were Here.

"It's been a wild ride," he comments. "But when it came time to make this record, I knew I had to take the time to make it right. On the first album, I was scared to death. On the second one I was a little more relaxed. That one was such a big success that we were working 'round the clock on the road, so the third album was kind of rushed. This time, I put on the brakes. It was supposed to be released in February, but I wasn't happy with what we had at that point. So we put off the release date until I was confident that it was everything I wanted it to be. I am proud of this project."

Despite the twinkle in his eye and his sunny nature, Mark Wills has always guided his career with wisdom and care. After winning local talent contests, at age 17 Mark announced to his parents that he was moving to the big city of Atlanta to follow his dream.

"Imagine that you've got a 17-year-old kid who's starting to make his own decisions and one of the first is that he's going to start singing in a bar," commented Wills. "My dad wasn't real happy about it. But I wasn't worried. I've never been a drinker. I'm not a weak person; I don't fall under people's peer pressure. And at the same time, I'm headstrong enough to say, 'I see my chance, here, and I'm taking it."

With its heartfelt message of tolerance and charity, "Don't Laugh at Me" garnered nominations from the Country Music Association for Single, Song and Video of the Year in 1998. Again, career success dovetailed with personal happiness. That is also the year that Mark and Kelly's daughter Mally was born, bringing a deeper joy and depth to the words of the songs he sings as an artist.

Mark's journey from platinum-selling recording artist to happy husband and father has brought to life the very words of the title track. With a new album and so much else in front of him, how could he be doing anything but be loving every minute? 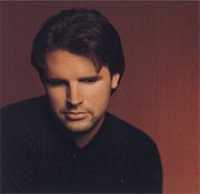