Close your eyes and imagine a world filled with so many contradictions that its damn near impossible to tell left from right, up from down and right from wrong. Picture a culture at war with itself, where the best of what it has to offer struggles to see the light of day, where style almost always trumps substance, where people eek out an existence based on their ability to blend in with an insanity that has come to represent the status quo. Okay...now imagine a voice in the midst of that wilderness, in tune yet different from everything that surrounds it. Barely identifiable over the monotonous hum of the daily grind, the voice is a constant that grows louder by the minute. What began as a soft whisper, innocent and only flirting with your audible consciousness, has grown into a definite roar, distinct and undeniable in its existence.

Open your eyes. It's 2004. Fantasy meets reality. Hip-hop rules the world. Lupe Fiasco is the voice. At 22 years young, he's an executive with First and Fifteenth Entertainment who pulls from his experiences of being signed as a group member (with Epic), a solo artist (with Arista) and a track broker, in order to blaze his own trail to success. Paying close attention to the advice of his mentor, Jay-Z, Fiasco's got a firm grip on this industry bit. He's a talented mc with the mind of a CEO. From a soft whisper to a definite roar...It's time to hear from the truth.

"My Music is everything."

Wasalu Jaco aka Lupe Fiasco, is a mixed breed; a deep thinker with a wild imagination, a quick wit and a sharp tongue. A young man of humble beginnings, Lupe was reared on Chicago's West Side by conscious, conscientious parents who, though divorced, explained the complexities of life and nurtured an understanding beyond what the normal mind could comprehend. "My mother is on some real intelligent type deal," explains Lupe. "She's a gourmet chef who traveled the world...but she's in the hood. She's like the mother of the hood. When she cooks, everybody comes to the house. From the dope dealers, prostitutes, to the kids on the block...everybody can come sit down and talk with her." His father is a "colorful cat" that was big in the Black Power movement. Trained in both the armed forces and the martial arts, he raised his son to have an appreciation for the tools of war. As an mc, Lupe wields his mic sword like a samurai - a killer with an appreciation for the art. Often times, he's an artist with an appreciation for the kill.

"If you just recording records about shooting nggs, selling dope and things like that, and if on the end of that third verse, it's not culminating into some sort of explanation, like you trying to show people something else... if you ain't making people think about themselves and what they doing to they community, then you ain't on...!. You just rapping to be rapping. And to me, that's when it's just like whatever."

While his consciousness demands a certain amount of accountability, Fiasco refuses to be pigeonholed by the stereotypes often associated with an intelligent mc. Growing up, NWA, Spice One, the Ghetto Boys, Biggie, Nas, and Jay-Z were among his favorites. The diversity and influence of these artists is evident in Fiasco's style and point of view. His music hits from all angles, His voice reps for many a hood.

"You'll get it all around the board. Stories, bounce records, all types of just everything. I look at hip hop and rapping like it's an art, where I never want to do the same photo twice. I'm not a gallery artist, where I'm trying to make joints just to sell. I'm really just trying to express myself, knowutimsayin'. I'm going to change up on every record, on every style and every view."

An original G-MC (the moniker of Lupe's original crew, the 1500s), Lupe traveled the states, battling and building a legend that put him in touch with countless A&R's, record execs and other industry heavyweights while a member of the group Da Pak. When the groups deal fell thru because of inner office turmoil, one of the heavyweights showed a special interest in Lupe and his partner Chili, who was then acting as Lupe's unofficial business manager. As one door closed, another one opened. And it just so happened to be Jay-Z that was holding it open, inviting the guys to come in and get comfortable.

"We'd sit down in the studio and talk for like three or four hours," says Lupe. "Like this is what it is, this is such and such...introducing me to the Pharell's and the circle that he was in. I'd just be in the studio and people would be like, 'who is that kid?' And it'd be like, 'oh, that's Jay-Z's little man." He continues. "It was like the cat molded me in a way to be in the game to where I can keep my respect as an MC and not sell myself out but still put myself in positions where I can keep the money going. He taught me how to do what I call the money flow, where it's like brothas still respect and can't mess with you no matter what they do. You ain't gotta jump off the handle to get out there. You ain't gotta chase radio. You ain't gotta chase these cats. All you gotta do is do you. Put it out and they gon' come just because. This is Jay talking to me, saying he can see it in me cause that's the way figgas used to do him. And you can't argue with that, cuz that's Jay. So what I'ma say? It's like 'alright'."

It is alright. Matter of fact, it's more than alright. Having already put others on as both producers and artists, Lupe Fiasco is poised to officially enter the games as the industry's next big thing. If reputation and the company you keep mean anything, music fans the world over should prepare a space on their wall for hip hop's new poster child. Far from an overnight success, Lupe is preparing himself to be in the game for the long haul.

"The first album, if they just get a good introduction, if people say he's a good rapper...I'm good with that. But the executive side of me is like, 'let's sell these records, too'."
"Let's create a whole Lupe Fiasco culture...a scene and a message for people to follow behind and really look at as a role model. Whether it's a role model for hustlers or a role model for positive niggas...whatever it be, let's create something where people are saying, yo, that's the new Nas, or that's the new Jay, that's the new such and such that's gon have it for the next four or five years. At the end of the day, I'm just here to make good music."

"Okay. Close your eyes. Imagine that all that was said is true. Can you hear the music? Do you see the head nods? Can you feel the buzz? Open your eyes, put the cd in the player and press play. The truth speaks volumes." - TJC 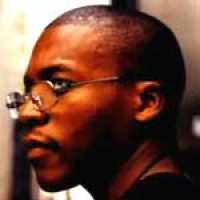