IN his childhood, Lou Reed longed to play rock and roll — a common dream, perhaps, but Reed was different. By his teens, he had learned to play guitar, had made his first record, had alienated his suburban parents, and had been subjected to electro-shock therapy. During these years, Reed's parents insisted that he take typing lessons so that he would develop a saleable skill, but that didn't seem to cure him of his rock and roll aspirations.

As much as he could, Reed tried to live the straight and narrow: he went to college at Syracuse University in New York; he joined the R.O.T.C. (he was kicked out for threatening to shoot an officer); after graduating, he took a post with Pickwick Records as a staff songwriter, and tried to pen Top 10 hits. But he never seemed to fit with the program — even as a songwriter. He realized that cookie-cutter hit writing was not his rock-and-roll dream, and in 1965, he and another staff writer, John Cale, formed a band called the Warlocks. As quickly as they added members, they changed band names: in the space of one year, they became "The Primitives," "The Falling Spikes," and, finally, "The Velvet Underground" — a name lifted from a pornographic novel.

Reed and Cale (along with Sterling Morrison and Maureen Tucker) worked for a while as the house band at Café Bizarre in Greenwich Village, but were fired one night for playing "Black Angel's Death Song" immediately after being told not to. On the night of their dismissal, they acquired a new fan — a rather well-known artist named Andy Warhol — and suddenly they were off on a new adventure. Warhol felt the Velvet Underground would work well in a multimedia show he had envisioned, called "The Exploding Plastic Inevitable." He added a German chanteuse named Nico to provide vocals and histrionics, and the show toured the U.S. and Canada to wildly mixed reviews. Objections were made not only to the avant-garde theatricality — and the sheer decibel level — of the show, but also to the subject matter of Reed's songs, which were diametrically opposed to the "Summer of Love" sentiments sweeping the nation.

The Velvet Underground released four albums in four years before Reed left, in 1970, and the group was roundly ignored by the music-buying public and by most critics. At the time, Reed was writing unflinchingly about the seedy Manhattan street he knew and lived in — a place of decay inhabited by artists, junkies, homosexuals, and sadomasochists. Sometimes, he wrapped all of these into one, as in "Sister Ray," a song about a transvestite heroin dealer. These tales of deviancy were told over a dissonant sonic backdrop — a combination that stretched the tolerance of most contemporary listeners. Still, the band's influence on later musicians was indelible.

It seems that just about everyone who bought an original Velvet's album wound up either starting their own group or becoming a rock critic. As final testimonial to their significance today, all Velvet Underground albums are still in print, and in 1995, a five-CD retrospective, Peel Slowly and See, was released to good sales and critical acclaim.

After Reed left the band and went underground himself, he worked with his father's accounting firm on Long Island. A year later, in 1971, RCA signed him to a solo contract and sent him to London to record Lou Reed, which was released in 1972. While in England, Reed met David Bowie, a self-proclaimed Reed fan; Bowie produced Reed's next album, Transformer (1972), which included Reed's most popular song ever, "Walk on the Wild Side." For the rest of the decade, Reed consistently put out inconsistent work. A certain core audience connected with Reed's visions of beauty in ugliness (Berlin, 1973) or noise in music (Metal Machine Music, 1975), but the public at large was left more turned off than on. In 1978, Reed released The Bells, which critics compared to such classics as Van Morrison's Astral Weeks and the Rolling Stones' Exile on Main Street.

By the mid '80s, Reed had laid down the Velvet's mantle and was writing brighter, more up-tempo songs (on 1984's New Sensations and 1986's Mistrial). Even while writing about death and other somber topics, on 1992's Magic and Loss, he avoided complete and abject depression. In 1993, Reed joined the other members of the Velvet Underground in a final, reunion tour of Europe. (Sterling Morrison died in 1995.)

Maybe Reed is a romantic at heart; after all, he once got married on Valentine's Day, and he speaks glowingly of his current love, Laurie Anderson. A new album, with the hopeful title, Set the Twilight Reeling, seems to be the work of a man who has finally made his peace with life. 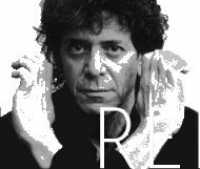