Liv Kristine was born on 14-02-1976 in Stavanger, Norway, weighing 2120 grams and measuring 46cm! Before she could even talk, she already started to sing. Liv Kristines' first appearance on stage was in first grade in primary school, interpreting Hits of current popstars. As a girl, Liv Kristine spent a lot of time writing lyrics and music (also "operas"), singing, dancing or simply listening to music. At home her dad played the sound of Black Sabbath to her. The first album she ever bought was "like a virgin" by Madonna and she has remained a true Madonna-fan ever-since. At the age of ten, she had already formed a band with a friend who could play the piano, called "twice". It became serious of course only when she became a member of the Goth Metal band Theatre Of Tragedy. Liv Kristine was eighteen years old and in the meanwhile she had became a solo soprano in a 200 men/women strong choir. Less than 6 months later with the Norwegians producing the self-titled debut-album "Theatre Of Tragedy" with the producer Dan Swano in Sweden. In the succeeding years the albums "Velvet Darkness They Fear" and "Aegis" followed. During this the first touring with Theatre Of Tragedy started (with bands: Atrocity/Das Ich, Moonspell and so on). She also started studying English at the University of Stavanger (now Stuttgart), moving to Germany to live with her boyfriend Alex Krull (Atrocity). In 1997 she met producer Guenther Illi (Tatort, Schimanski, Welt der Wunder) and started to write songs with him. She enjoyed the co-production and realised that she would like also like to start a solo- career, working within different music-genres, participated in several musical projects like Atrocity (Werk 80), Heavenwood or Weltenbrand. As a singer with a variable voice, she can do almost everything from pop or classic to other directions like Metal/Wave or Goth. Her biggest interest is to experiment with music and to try new things. This has also been made possible by the release of her first solo-album "Deus Ex Machina" and the singles "Take good care" and "3am." (with her duet-partner Nick Holmes from Paradise Lost and also title-song of a "Tatort"-series). The first solo-shows took place in December 1998,at the "Dark Storm"festivals, with Witt, Atrocity and Oomph, they were resoundingly successful. Followed by a great appearance at the "Wave-Goth-Meeting" in the spring of 1999. 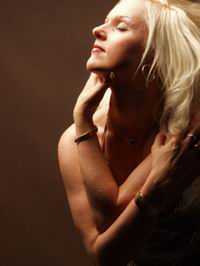