Few artists approach their work with the grace and dignity of Linda Ronstadt. For more than four decades, and through some 32 albums, she has remained one of the most beloved singers of our generation. Her career is a virtual testament to the idea that nothing quite lifts the human spirit like a good song. With an impresario's ear, and a voice that still resonates with a haunting gift-like quality, she's crossed all genres, always defying expectations as to what a pop record should be.

"What I've always done is set myself in a traditional genre and tried to be completely faithful to what the genre demands," says Ronstadt. Whether it be rock, country, pop, or stylistic ventures in big band music, jazz, opera, Broadway standards or Mexican and Afro-Cuban music, Ronstadt has worked with an incredible dedication to her craft. Her most recent albums continue to reflect her virtuosity, such as last year's acclaimed Christmas release, Merry Little Christmas, and 1995's unique collection of lullabies for children, Dedicated To The One I Love, to name a few.

Ronstadt made her pop debut in 1967 with the Stone Poneys. It was soon after that she began working with Neil Young. "I sang backup on a lot of his records. He'd call up and say 'I'm making a record, come on down.' He had a recording studio on this ranch. We'd record all day and end up with so much stuff I'm still not sure what made it on to the records." Few knew in those early days that both artists would go on to rewrite pop history. With seven Grammy awards and over 50 million albums sold to her credit, Ronstadt says the only formula she's ever lived by is an undying allegiance to the slow craft of songmaking. With a platinum track record that includes classic albums Heart Like A Wheel, What's New, and her Dolly Parton, Emmylou Harris collaboration Trio, as well as its follow-up in the late '90's, it's obvious the workmanship has never wavered.

Her love for the art of recording helped her form a long standing partnership with legendary engineer George Massenburg, whom she proudly calls a "friend as well as a musical guiding light."

From her debut album, 1967's Evergreen, to last year's holiday gift to her fans, Merry Little Christmas, Ronstadt has helped redefine what it means to be a contemporary artist. For a singer who has won rock, pop, country and Latin music Grammy's, she has triumphed for more than four decades raising great songs from their hiding places, polishing each one with her own indomitable artistry. 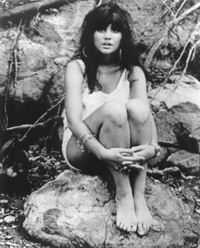