Les Charlots was a band of French musicians and actors, who were popular in the 1970s. They were first musicians, accompanying Antoine under the name of "Les Problèmes", then they made their own band, becoming rather popular for humoristic songs like "L'Apérobic", "Merci Patron" or "Le Chou Farci".

The group members were Gérard Rinaldi, Jean Sarrus, Gérard Filipelli, Luis Rego and Jean-Guy Fechner. Les Charlots means "the clowns" rather than being a direct reference to Charlie Chaplin, who was generally called Charlot in France.

When the five boys became too old to play the clowns and audiences became too bored, the group attempted solo careers. Gérard Rinaldi (deceased March 2, 2012) became a TV actor, while Jean Sarrus became a TV host. Luis Rego is a movie actor while Jean-Guy Fechner works with his brother, Christian Fechner, a powerful French movie producer. The last member disappeared from the public eye. 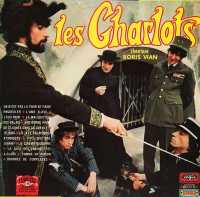