The Yardbird's played their final show at Luton Technical College in 1968. But what was seemingly an end; turned out to be the beginning of three tremendously successful careers in music. The careers of guitarists Eric Clapton, Jeff Beck and Jimmy Page. It's seems the three couldn't agree on anything creatively in the Yardbirds. They were all leaders.

After the bands break-up, Jimmy Page was left with little more than a series of concert obligations. He started jamming with John Paul Jones, a session player, who had collaborated with likes of the Rolling Stones, Herman's Hermits and Dusty Springfield. The duo discussed forming a new group, but ended up delaying their plans to back Donovan on his Hurdy Gurdy LP.

After hearing of Pages' intention of starting a new band, vocalist Terry Reid suggested he hear Robert Plant. When Page got a chance to check Plant out, Jimmy not only ended up liking his voice, but also his stage presence. Plant, in turn, suggested they recruit John Bonham, the drummer of his old Birmingham group, Band of Joy. The foursome clicked so nicely that they toured Scandinavia during October 1968 under the name the New Yardbirds.

By 1969 the group changed their name to Led Zeppelin, recorded, and released their first self-titled album. Within two months the album reached Billboard's Top Ten. The album is essentially Zeppelin most blues-driven release. Page's early style drew so heavily on the blues that Willie Dixon later won a large settlement for the copyright infringement. Rumour has it that a few of song titles off the first release ripped off old blues titles; they only changed one word in these songs catch phrases.

Led Zeppelin II and every release after has attained Platinum status, and in 1973 the group began to break box-office records set by the Beatles. By 1975 Led Zeppelin was the most commercially successful rock band in the world.

The group broke up after the tragic death of drummer John Bonham. He died from what is medically termed as asphyxiation: inhaling his own vomit during sleep after a drinking binge. His hard-hitting style has so integral to the bands sound that the remaining members decided to call it quits. Without Bonham there could be no Led Zeppelin.

The mighty Zeppelin has experimented with several musical styles over the bands reign. Their sound began with Blues and thunderous Heavy Metal, softened to mystical Folk and tumbled into the realm of Funk, Psychedelic Rock, and the fusion and integration of all these styles. Perhaps this is why their music has attained the lasting value that only two other groups have been able to secure, the Beatles and Pink Floyd. 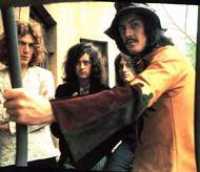