La Fouine, whose real name Laoun Mouhid, was born on 25 December 1981 in Trappes in the Yvelines (France) to parents of Moroccan origin. Child, he likes to listen to American rap and the age of fifteen, he decided to quit school to devote himself to music. But life is not always simple and La Fouine is involved in dirty business going to find homes for education and prisons. There he will build the character and draw the strength to grow in music. From the early 2000s, it is found regularly on compilations or he is featuring noted.

The year 2003 will be the chance for La Fouine. Côté coeur, he married and his wife gave birth to a baby girl and later work, he signed a contract with the record company Sony. In 2005, he released his first album, "In His Bourré. La Fouine machine is started and nothing can stop it. It enchaine records for him or in collaboration with other rappers (Booba, Sefyu, Soprano, etc..) And released the album "Round Trip" in 2007 and then "My Compass" in 2009. Become one of the best rappers French, La Fouine can be proud of her. 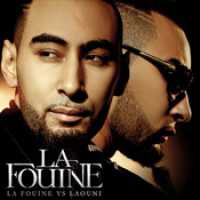