Both had been previously playing with other various bands,and a strong chemestry between the two convinced them to try and start a band.In 1986,Jennifer Finch moved back down to her native LA, from San Fransisco,where she had been playing with various bands and living prior to this year. She was enlisted to play bass,and both Suzi and Donita played guitar and sang.

With their original drummer,Roy Koutsky,they began playing in various clubs prefroming under names such as "Very Bad" untill
finally setteling for "L7".

In 1988 they recorded and released their self titled debut album for ex-Bad Religion guitarist Brett Guertwitz's (who also produced it) label, Epitaph Records. In 1988, Demetra (Dee) Plakas,who was also from the Chicago area, joined the band and finilised their lineup.

During the next 2 years, L7 spent time preforming around LA, and eventually touring the US twice in '88 and once in Britian,
supporting Nirvana's '89 "Bleach" tour.

Heading for the north west after hearing about the underground scene which was evolving, the band signed with Sub Pop Records and released their EP, "Smell The Magic" in 1990. The bands popularity grew with the release of the 'Shove/Packin'A Rod' 7" vinyl single, which got lots of college radio airplay and becuz of their soldout shows in their US tours in 1990. They were signed one year later by Slash records, who took notice of the band's now-sold out shows.

Their major label debut, the Butch Vig produced "Bricks Are Heavy", was released in summer '92 and was their most accesasiable (and eventually most successfull) album yet. The album , supporting the hit single, "Pretend We're Dead" landed L7 spots on the both of the Billboard's "New Artist" and "Pop Album" charts.

They done a couple of US tours and performed 'Pretend We're Dead' on The "Late Show With David Letterman",and on the britush TV show "The World" (where Donita dropped her pants in front of all TV viewers to see). They also toured Japan, Austraila and Europe, playing some festivals (among them the infamous "Reading Festival '92", where-in Donita Sparks threwe a bloody tampon to the much-surprised and disgusted crowd) and supported Faith No More on a winter tour of Europe.

Besides touring, the girls organized and played many benefits for Rock For Choice, a Pro Choice organisation founded by the band to raise awareness of the growing threat to civil liberties and women's rights. The first Rock For Choice concert that was held feauterd preformances by bands such as L7, Hole, Nirvana, Rage Against The Machine, Mudhoney and Pearl Jam.

Nowadays, L7 have been slowly stepping back from their active roles in Rock For Choice, and letting the coordinators take over. Rock For Choice is now a full time project and L7 act as consultants whenever needed.

In 1994 the band released its 4th album, titled "Hungry For Stink",which is probably their heaviest to date, and was coproduced by Garth Richardson. the album's first video "Andres" was co-directed by Steve Hanft (Beck's 'Loser') and Donita Sparks. Also, the band contributed the song 'Gas Chamber' to the John Water's movie "Serial Mom" (which they guest appered in as the female rock group dubbed "Camel Lips") and appeared in 1994's Lollapalooza tour.

2 years later, in late '96 bassist Jennifer Finch announced she was leaving the band to persue other interests.

Coproduced by Rob Cavallo, The album supurts a more "Alternative" and accessiable sound then its precedurs yet it still preserves L7's unique blend of music and twisted, funny lyrics.

It was also their first album without bassist Jennifer Finch, so bass duties for this album were done 50%-50% by Donita and Greta Brinkman, who is friends with the band.. The Band spent '97 touring with Marilyn Manson in support of his "Antichrist Superstar" album, featuring a new lineup with the new-recruited Gail Greenwood (ex-Belly) as the new full time bassist. Although the album was a success among fans, but not among record buyers, the band was dropped by their label, Slash/Reperise later that year.

1998 followed with the release of the now-out-of-print live album "Omaha to Osaka" on the indie label Man's Ruin , and the Krist Novosellic mockumentry "The Beauty Process". The live album is made off of tapes of their live shows in Omaha, Nebraska, and Osaka, Japan and filled with in-between-song banter, which in a long L7 tredition is as funny as hell.
That summer tour the band rented two planes—one in LA and one in New Jersey—with custom banners, flying not only in the face of convention, but over the crowds of two of the biggest road shows of the summer. The first banner was sighted over the Lilith Fair in LA, reading, "Bored? Tired? Try L7." The second banner was flown over the Van’s Warped Tour in New Jersey, reading "Warped needs more Beaver… Love L7."

just before the recording of the new album, Gail Greenwood annaounced her departure from the band due to geographical reasons.

Forming their own label, Wax Tadpole, and teaming up with Bong Load Records, 1999 saw the release of the band's more experimental then ever album "Slap Happy". Released on August 24th, the album saw the band experimenting more, like the mock electronic "Freeway", the loose and witty "Livin' Large", the haunting, soft "Freezer Burn" as well as some the usual hard rockers like "On My Rockin' Machine" and "Crackpoy Baby". Ex-Stone Fox bassit Janis Tanaka was recruited as the new bassist.

The band toured their asses off during '99-'00 and are now (hopefully) working on their next release. 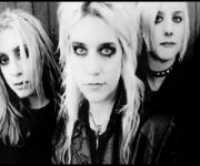