Kurt's first performance occured when he was only 4 years of age, and took place at a local culture-house. He got good response and started to get used to the stage at a early age.

With the new single in stores, Kurt is starting to get known as a solo-artist. But he is still a frontfigure in the band Fenrik Lane, where he has gotten some great experience. Kurt has other talents then just singing. He can also play many sorts of instruments, among them are flute, piano, violin, drums, bassgitar and shaker.

With sales reaching over 108.000 copies of his latest single, Kurt's feature as an solo-artist looks very bright. If he one day could afford a house by the sea, a 15 foot "Askeladden" boat, fishinggear and a little recording-studio placed inside the boat, that would be his dream. The house wouldn't have to be in perfect condition since Kurt enjoys working outdoors and do carpentering.

After Kurt won the norwegian Idol, he's had very little time to spend on his own. His biggest hobby is fishing, and he clearly misses it. Favorite tv-show is ofcourse Fishingfever. Even though he doesn't enjoy washing and cleaning up at home, he miss his girlfriend and two little kids home in Bergen dearly.

As you might know, Kurt is a major fan of the bear-brand Hansa, but his diett consist of more than so. He loves "pinnekjøtt", which is lamb ribs that are salted and cooked a special way. This is an norwegian christmas tradition, and many eat this on christmas eve. In addition to this, Kurt loves danish salami and gets a kick sometimes which results in a massiv consume of chips and chocolate. And ofcourse, bear with peanuts is a real hit-tune when going out.

When it comes to clothing, Kurt is keeping it simple. He is not very used to be dressed up, and surely misses his old jeans and sandals.

Even though Kurt drives a car in the musicvideo "She's So High", he does not have a license. He had to stop the training when Idol took off.

Kurt has now finished recording is debutalbum "I". The recording of the album went fast, as does the rest of his raising fame. However, he did get some time in between the recordings to go fishing in a river just near Ole Evenrud's studio, Hitsville, like he did during his vacation. Kurt had 10 days in the studio, and a lot of it was spent traveling between his home, touring and the studio. He had written quite a bit of the material from earlier on, so 9 of the 12 songs on his album is written by Kurt himself. 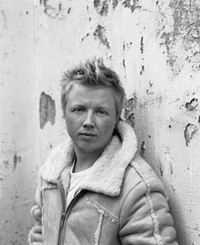