A.B. Quintanilla III founded the Kumbia Kings in 1999 and has taken them to unprecedented heights of success in the Latin music world. They’ve sold millions of albums and won awards and nominations from the American Music Awards, Latin Grammys, Tejano Music Awards, Univision’s Premio Lo Nuestro and Billboard Latin Music Awards, among others.

The group’s visionary outlook springs from the creative force of A.B. Quintanilla III. He’s the only producer, composer and musician who is in demand in genres as diverse as regional Mexican, Latin pop, Tropical, and Tejano. His influences, meanwhile, range from R&B, pop, hip-hop, reggae and rock to rap, techno-funk, acid, and house. Plus, he has created his own genre, which he dubs kumbia mix.

A.B. Quintanilla III, the oldest child of Marcela and Abraham Quintanilla II, was born in Toppenish, Washington. A few years later, the Quintanilla family moved to Lake Jackson, Texas, where his sisters Suzette and Selena were born.

When the family moved again, to Corpus Christi, the kids’ lives took a 180-degree turn – they were surrounded by Hispanic culture for the first time. It was a culture shock, but a positive one. A.B. quickly absorbed the influences and in 1984 became musical director of the Tejano group Selena y Los Dinos.

By 1990, Selena y Los Dinos had signed with EMI LATIN and were becoming known as one of Tejano’s most exciting young groups. The dues-paying was finally bearing fruit. A.B. was producing and co-writing songs that were becoming legendary in the voice of the immortal Selena.

On March 31, 1995, grief struck the Quintanilla family and the entire music world, when Selena’s life was tragically cut short at age 23. Her death made a mark on her brother A.B.’s musical personality, and left a permanent scar on his soul. It would be more than a year before he could think about making music again. 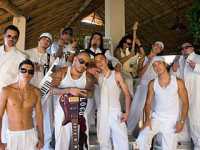