Kumar Sanu (alias Kedarnath Bhattacharya (Bengali: েকদারনাথ ভট্টাচার্য), born in Kolkata, is an Indian playback singer of Bollywood. He won the Filmfare Best Male Playback Award for five consecutive years. The Government of India honoured him with the Padma Shri in 2009

Kumar Sanu's father Pashupati Bhattacharya was a vocalist and composer. He trained Sanu as a singer and tabla player. After getting a degree in commerce from Calcutta University, Sanu began performing publicly in 1979, singing at shows and restaurants around Calcutta. He modeled his singing style after Bollywood singer Kishore Kumar. Later he developed his own singing style

He has also turned his trade at making music for Indian films and also produced the Bollywood film, Utthaan.

Sanu was in the panel of judges on Sony TV for Waar Parriwar, a reality show based on the bringing together of a singing gharana (family of singers) and on Zee Bangla TV in a music reality show called Sa Re Ga Ma Pa - Vishwa Sera.

He joined Bharatiya Janata party in 2004 in a ceremony headed by (party) president Venkiah Naidu. But he was ousted soon 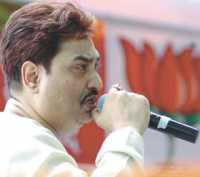