Born Lawrence Parker in Park Slope, Brooklyn in the summer of 1965, the rapper left home at 14 to play basketball and read books free of the gaze of the authorities (his mother and the New York City public school system). He landed in a homeless shelter in the South Bronx, where he was dubbed Krishna by residents because of his interest in the Hare Krishna spirituality of some of the antipoverty workers. By the time Krishna met youth counselor Scott Sterling, he was also writing graffiti as KRS-One (Knowledge Reigns Supreme Over Nearly Everyone). Together he and Sterling, a.k.a. DJ Scott La Rock, created Boogie Down Productions, releasing their landmark debut album, Criminal Minded, in 1987.

In 1985, Scott La Rock was asked to do an already written and produced record for Sleeping Bag Records. Of course Kris and Scott wanted to concentrate on their own Boogie Down Crew but first they had to go through this. For this project they were paid nothing and had no rights or claims to anything. It was this project that educated Kris and Scott as to the importance of being producers of their music, as well as the artists, so at this point they decided to change the name of their own Boogie Down Crew to Boogie Down Productions.

At the close of 1987, the B.D.P lifestyle got real and Scott La Rock was killed trying to break up a dispute in the Bronx. This shocked the hip hop communitity and as a result rap and violence became a topic in the mainstream press. The rap community thought Boogie Down Productions was over but this only led to new plans for KRS-One. In 1988, KRS-One left B. Boy Records to sign with Jive Records and "By All Means Necessary" was released. Rap music was under a mainstream microscope and KRS-One now was able to release what he and Scott always dreamed about, an album that gave rap a different image. His first video on Jive Records was for "My Philosophy", a song that re-established his presence in the rap world.

In order to understand KRS-One, it is imperative that you either understand hip hop as opposed to rap or open your mind to the reality of what is going on around you. KRS-One is not a bullshit artist. His career began in 1986 and since then no other rap or hip hop artist has come close to his consistency with hit albums. 1987, Criminal Minded, 1988, By All Means Necessary, 1989, Ghetto Music, 1990, Edutainment, 1991, BDP Live Hardcore, 1992, Sex And Violence, 1993, Return of the Boom Bap, 1995, KRS ONE.

Having lectured at Harvard, Yale, Vassar, Columbia, N.Y.U. and Stanford, KRS-One is nicknamed "THE TEACHER." There is only one KRS-One. That's it, that's all, solo, single, no more, no less. KRS-One has been quoted as saying "This is rebellious music, not gangster music." KRS-One is beyond rap, he is a manifestation of hip hop culture. KRS-One is a force in rap so powerful that his songs are sampled by many artists, giving rise to other hit records for these artists.

KRS-One, through Boogie Down Productions hasn't been an artist that jumps on any passing bandwagon. KRS-One stands as a trendsetter in the hip hop world. He is a producer that specialized in breaking new ground and new artists. For example, KRS-One in 1986 introduced the hip hop reggae style to rap music and things have not been the same since. KRS-One is the first artist to rap in an "off beat" style, influencing hundreds of rappers to do the same. KRS-One is responsible for pushing hip hop culture and rap music to some of its most advanced levels. He has influenced the reggae market with his work on the first Shabba Ranks album.

He also has done ground breaking work with R.E.M. With this, as with many other things today like Ol' Dirty with Mariah Carey and Fugees with Simply Red, comes criticism from fans of "not keeping it real" but these fans in the eyes of many "real fans" are just contradicting those words in that they should like the music for what it is and should not ctiticise the artists for their work out of the hip hop industry.

KRS-One also has the best live hip hop show in the world. You can ask the critics of Japan, England, Denmark, Holland, France, Germany and Italy. Everywhere KRS-One goes, he packs them in for an hour long classical hip hop performance. Ask the critics in America, KRS-One has performed for some of the hardest audiences to please and left them gasping for air and drenched with sweat.

After all these projects, KRS ONE is still going strong in 1997. He can still please the hardcore hip hop fans with tracks like "The MC", "Can't Stop, Won't Stop and "Step Into A World". Who knows how long he'll keep going on, one thing we do know is that KRS ONE is one of the biggest, if not the biggest, names of all time in hip hop. In his own words in "If you don't know me by now, I doubt you'll ever know me". 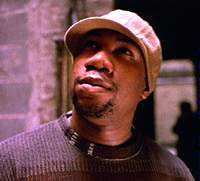