From the suburban streets of Orange County come the psychedelic hip-hop punk rock outfit, the Kottonmouth Kings. As much hip hop as they are punk rock, the Kottonmouth Kings stand as a musical testament to a day when musical barriers are blurred, color lines are nonexistent and music has dug deeper into a realm where the ideals behind it reign over any particular style or genre. Produced by band member, Brad Daddy X, ROYAL HIGHNESS, the band's Capitol Records/Suburban Noize debut album, takes advantage of SoCal's open and fertile musical landscape. The band's diversity is shown throughout -- from the twisted rap party of "Psycho Funk," to the reggae-influenced "Dog's Life," and the guitar-driven "Suburban Life." With the throw-your-hands-in-the-air all-out party jams of "Bong Tokin' Alcoholics" and "Bump" the band proves they know how to have a good time.

Yet the Kottonmouth King's go beyond being a party band. They offset the good times with thought-provoking observations throughout their music. "Suburban Life" comes alive by retaliating against the laissez faire attitude of a close-minded middle-class world, while "Big Hoss" contemplates the humanistic aftermath of someone doing time. But don't call the Kottonmouth Kings political. They're exactly the opposite. The Kottonmouth Kings call themselves anti-political, taking the individuality and free-thought bred in punk rock and mixing it up to be accessible for all. The crew doesn't turn toward institutions or history for their beliefs, instead these lyrical anarchists venture deep inside the individual for truth.

"It's not about just hitting the bong, it's about learning something," says rapper Saint Vicious. "Put the Kottonmouth Kings' CD on -- don't label it hip hop, don't label it punk rock, label it a mentality.

We're making a way to expand your knowledge of the world around you. In our songs we talk about reality. We talk about doing some crazy shit, 'cause life is crazy."

With Saint's feverish barrage of lyrical style checking everything from the misuse of political power, to pranking about the antics of his suburban youth, and D-Loc's stylish drawl, the two began weaving the tales that range from street punk stoner stories to poignant social commentary. With the addition of DJ Bobby B., the band quickly jelled into a mind-rattling blend of punk rock and hip-hop flavor. The addition of Pakelika "the visual assassin" - a gaunt popping and locking silent robotic stage presence - only adds to the uniqueness of what the Kottonmouth Kings deliver on stage.

The band started making a name for themselves on the West Coast with the help of forward-thinking Kevin Zinger's SRH Production and Brad Daddy X's own Artist Groove Network, which also helped build the careers of a diverse group of talent such as The Offspring, Sublime, and Sugar Ray within the skate, surf and snow underground scenes. The band's own label, Suburban Noize, joined forces with Capitol Records and released the EP, Stoners Reeking Havoc, earlier this year. 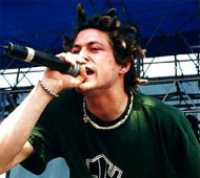