KOTOKO was born in Sapporo (northern Japan), on January 19. From elementary school, she believed her career would be influenced by her voice and tried to involve herself in as many auditions as possible.

She turned professional in 2000. Her first successful audition was with the I've Sound a team of producers using the talents of various female vocalists for their productions - best recognized for their many dating sim and eroge game soundtracks. Since then, KOTOKO has performed opening & ending themes for a few anime and has gained significant recognition from her two I've Sound related album releases. Her second album, "Glass No Kaze," released in June 2005 has been praised within multiple online communities. On October 13 2005, she released her 4th MAXI SINGLE, which featured a song from the Glass No Kaze (Garasu no Kaze) album, 「421 -a will-」, with a new song called 「Shuusou/Akisou 秋爽 (The Refreshing Autumn Breeze)」. She recently released her 5th MAXI SINGLE on March 23, 2006, which features the 2nd OP to the anime Shakugan no Shana ,「being」.

Although not listed on her official Geneon website, KOTOKO has actually released 5 albums. The first one, Sora wo Tobetara, was released in 2000. Many of the tracks on this album were later re-recorded for her 1st I've Sound album, 羽-hane (and attributed as her 1st album). The second and third albums are listed as I've Girls Compilations albums, which are listed as Lament (Fourth Album) and Collective (Sixth Album).

KOTOKO's first official performance in North America was her highly successful U.S. concert debut at Anime Expo 2005, followed soon after by the KOTOKO LAX Tour. A little-known fact is that KOTOKO's music has been influenced by musicians like Björk. Everyday life, however, speaks volumes in what inspires her writing. Now that her self-composed hybrid of pop & techno beats - sometimes pop - have crossed the Pacific, KOTOKO's lyrics have elevated her presence among thousands of North American J-Pop/anime fans. 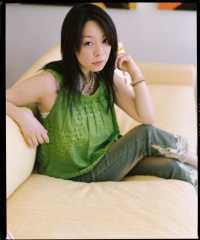