Once in a while, a band comes along that doesn't just ignore the rule book, but rewrites it. Since forming in the late 90's, Kosheen have proved that success doesn't have to come on someone else's terms. Fusing the plaintive, potent vocals of singer Sian Evans with the darkly intimate electronica of Darren Decoder and Markee Substance, Kosheen create songs where the sounds tell the story as much as the lyrics while the boundaries of genres are blurred and challenged. In 2003, individuality remains their calling card with their second stunning album, 'Kokopelli'. It takes the fearless, emotive blueprint of the band's debut, 'Resist', and couples it with Sian's more confident song writing, a heavier rock influence and the experience of playing live around the world. It is a natural progression, but a huge leap forward; confirmation that Kosheen are currently one of the UK's most exciting, experimental bands.

The foundations of this revolution were laid years earlier when music changed the lives of all three band members. Darren Decoder - aka Darren Beale - played and wrote music for years in various punk bands at school in Weston-Super-Mare, always recording their efforts and so developing a simultaneous interest in the production side. When he went to university in 1989, though, he realised something was missing.

"I was getting bored of the sound of the guitar," he remembers. "I was putting it through so many effects and pedals that it wasn't even sounding like a guitar any more anyway."

His salvation came in the form of a young Geoff Barrow, future founder of Portishead.

"When I met Geoff, he introduced me more to the electronic side of music. What he showed me with samplers and stuff just blew me away! I'd never seen that before."

Spellbound, Darren sold his guitar, bought an Atari and a sampler and never looked back.

"That was at the same time that the whole rave scene was going off which had a big impact on me as well. I loved Orbital and 808 State, so I started writing lots of electronica and got a deal really early. Then I used to write hardcore stuff for raves and then did some really ambient drum n' bass like LTJ Bukem before I started Djing at raves and parties with Markee in Bristol. I followed the whole path of electronica really."

"It literally was a few people in a pub with a couple of decks. It's been over ten years since that pub gig!"

The pair soon got to know Sian Evans. Brought up in a small town in South Wales, Sian had left home at 16 and moved to Cardiff to escape, living in squats and friends houses while working several jobs at once and travelling to parties and festivals all over the country. At the height of the rave scene, in 1991, she gave birth to her son, Yves, and was forced to reassess her priorities. For the next four years, Sian and her son split their time between environmental protests like Newbury and working at summer festivals. It was all she needed to give her a taste for living outdoors and so in 1996, Sian moved into a tepee on a traveller's site in the Brechfa forest for nine months.

"I just thought it looked like a lovely way to live," she says, "and I wanted to give him the freedom to run around and have some amazing memories."

At night, after Yves went to bed, Sian passed the time by writing songs. Despite being brought up writing poetry and listening to Welsh folk music and Joni Mitchell, it was the first time Sian had felt moved to create music.

"I used to keep diaries as a kid and turn them into poems and I've always found that writing is better than talking sometimes. It's always been a great way to getting things off my chest."

Realising her future lay with these songs -in fact, most of them went on to form the tracks on Kosheen's debut album, 'Resist' - she soon moved back to Bristol to find someone to play them with. Enter Darren and Markee.

"I hadn't even taken my coat off in the studio and I was writing songs with them, even though I was quite nervous to begin with. Until I was with Kosheen, I didn't think of myself as a songwriter. I knew I could sing but I didn't have a lot of faith in my writing. I just thought it was something I did for me. I was told once when I was working with my first band in Cardiff when I was 15 that I was just a singer and I should stand in the background and wiggle my arse. That scarred me for long time actually. With Kosheen, I'd sing stuff to Markee and he'd say it was beautiful."

As a trio, the band learned they could combine their respective loves of rock, hip-hop, jazz, drum n' bass and folk and still create songs with a heart.

"I love songs!" Sian states simply. "Songs that start, have a middle, and end. People were expecting little loops and quirky vocals and they got full songs. You can put too much in a track. You can have a busy vocal, or you can have a busy track, but if you put two together it's just noise to me."

The world agreed they were something special. Kosheen's compelling, anthemic track 'Hide U' reached number 6 in the UK, while 'Catch' hit number 15 and 'Hungry' reached number 13. The accompanying album, 'Resist', went on to reach number 8 in the UK and made the top 30 in Australia, The Netherlands, Belgium and Greece. It has since sold half a million copies worldwide.

"I remember being in Vienna waiting to hear how our album had done," begins Sian. "We really wanted it to go well. The boys came into the dressing room and told me to guess the position. I said 15. They said no, lower. And I went oh no.. 20? And they were going, no! Lower the other way! It went in at number 9 and I think I burst into tears! I couldn't believe it."

Fame brought further peculiarities. Their tracks kept popping up in the background on Eastenders ("it was on the other night actually," Sian laughs, "in the garage while Ricky was under a car") and Ronan Keating declared himself an avid fan. 'Hide U' also won 'Best Remix' at the Muzik Dance Awards and Record of The Year at the Dancestar USA Awards in Miami.

"It wasn't an overnight thing," Markee explains. "Word of mouth played a massive part and I have this theory that people actually do appreciate quality things. We've always said that, at the end of the day, if you put your heart into your music, if you're feeling it, then you've got a chance that someone else will feel it too."

Ignoring the accepted protocol that dictates 'dance' acts don't play live, Kosheen then set off on tour. With their debut album 'Resist' this equated to an impressive 141 shows in 33 countries to an audience of over _ million.

"I cut my teeth on pub gigs in Wales," Sian says, "so I really wanted to get the music of Kosheen represented live. The songs really translated because they're very melodic. A lot of them were written on the guitar and we can actually do most of them unplugged too. When you strip a song down like that and it still works, you know it's a good song. A lot of people are surprised when they go into the gig and see a full band set up with a drum kit and everything. But no one's been disappointed."

In fact, crowds of up to 17,000 have since seen the band play in Europe, Australia, South Africa, Asia, even America where fans who had only heard Kosheen via Napster knew all the lyrics before anything had ever officially been played there. The LA Times went so far as to proclaim the band one of four hot new electronica acts to watch for. In summer 2001, Kosheen further cemented their reputation as a world-class live act by performing to a 20,000-strong crowd in Serbia, the first international band to do so since the trouble in the Balkans.

"On the plane on the way over there we were all looking at each other going why the fuck are we going to Yugoslavia?" Markee grins. "We didn't have a clue what to expect. And suddenly there was 20,000 people all singing catch back at us. Me and Sian just looked at each other on stage as if to say, fucking hell! What's going on?!"

Inevitably while on tour, Kosheen turned their attention to their second album. Enthused by the incredible reception they had received live, they began writing songs with that in mind, tracks they knew would sound great on stage. The resulting record - now named 'Kokopelli' after the North American Indian symbol of fertility, individuality and music - is a hypnotic, intimate collection of songs from the soul. The divide between Sian's folk upbringing and Darren and Markee's electronica background is less pronounced while influences including The Pretenders, The Cure, Kate Bush and Radiohead all resonate.

"I think it's harder and darker than the last album," Darren reckons, "and a lot more personal too. There are more guitars in there too but it's not your standard rock album. We've taken elements of rock and all different types of music which we enjoy and fused it all together to come up with something slightly different. I don't ever want people to expect anything from us."

Crucially, while the music sounds darker and more apocalyptic, Sian's lyrics have grown more personal, as she reveals herself to us track by track. While the bleak 'Recovery' tells of a feeling of not fitting in, coupled with excess of drugs or alcohol, 'All In My Head' is the ultimate long distance love song, inspired by a phone conversation between Sian and her own partner and describing the lover who may be physically distant but can always be present in your mind. 'Coming Home', meanwhile, is a beautiful, yearning wish to be back with those you love.

"I wrote it a long time ago but it became more poignant with touring. It's that idea of get the kettle on and the bed warmed up, I'm coming home! Just that lovely feeling of going back home to the arms of your lovers or your kids. That feeling, for us, of hitting the M32!"

For now, though, Kosheen are ready to hit that motorway again and bring their new studio sound to the live stage, the place where they have truly proved they are a band without limits.

"I feel like we're a band that's different to anything else out there," Markee states determinedly. "We can stand up and do a tune like any other rock band. But we can also go to a club and smash it up there as well. We want to be able to do that in all areas. It's just being greedy really!" 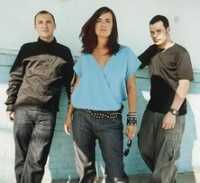