Kool G Rap never rose to superstar status during his late-'80s reign as a leading member of Marley Marl's Juice Crew, but the Queens-bred hardcore rapper endured for over a decade, eventually enjoying a renaissance in the early 2000s. Throughout his tour of duty, G Rap maintained a reverent following, mainly among his original late-'80s/early-'90s fan base and the subsequent wave of gold-age revivalists. Cold Chillin' furthermore repackaged his key recordings with DJ Polo periodically over the years, so G Rap remained visible even as his productivity slowed considerably. While countless other golden-age rappers thus fell by the wayside, G Rap quietly ascended to legendary status, perhaps as recognized in the early 2000s as he had been during his late-'80s prime.
The "Kool Genius of Rap" began life as Nathaniel Wilson in a rough section of Queens, where he first met Eric Barrier and Polo, two friends with a mutual interest in hip-hop. While Barrier went onto a short-lived yet successful career as the less-acknowledged half of Eric B and Rakim, Polo and G Rap collaborated and released the It's a Demo/I'm Fly 12" on Cold Chillin' in 1986. This legendary single was the first of several; "Streets of New York," "Poison," and "Road to the Riches" also being noteworthy singles. G Rap also graced Marl's "The Symphony," a performance that promised him legendary status in itself. By 1989 he was making LPs rather than 12" singles, signaling G Rap's rise from the underground to mainstream recognition. Yet while Juice Crew peers such as Big Daddy Kane and Biz Markie scored crossover singles, had big-selling LPs, and soon found themselves on MTV, G Rap struggled with his sudden position on the uncomfortable brink of crossing over. Sure, his LPs had their share of highlights such as "Road to the Riches" and "Erase Racism," in addition to the aforementioned singles, but his albums with Polo never achieved what many had hoped for in terms of popularity.

By the mid-'90s, G Rap parted ways with his longtime partner and attempted a solo career with 4,5,6 (1995) on Cold Chillin', followed by Rated XXX (1996) and Roots of Evil (1998). None of these albums garnered too much attention, commercial or critical, and it seemed as though G Rap was bound to suffer old-school status like most of his '80s peers. As G Rap's name became less and less acknowledged among contemporary rap listeners in the late '90s, the stalwart MC simultaneously began channeling his efforts toward guest appearances. Collaborating with the likes of Fat Joe, Big Pun, M.O.P., Mobb Deep, Nas, RZA, Big L, and Talib Kweli -- along with a surprising appearance on U.N.K.L.E.'s high-profile Psyence Fiction album as well as the Lyricist Lounge 2 compilation -- G Rap gained substantial momentum. Once joining forces with Rawkus, the rapper's renaissance officially began as the label began promoting his comeback album months before its proposed 2001 release. The album, The Giancana Story, unfortunately wouldn't street until late 2002, as Rawkus became increasingly entangled in major-label affiliations. Though some of the anticipation simmered during the long delay, the album nonetheless impressed many and forcibly signaled another of G Rap's periodic returns. ~ Jason Birchmeier, All Music Guide 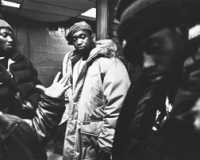