Kimberley Locke was born on January 3, 1978 to Christine and Donald Locke in Hartsville, Tennessee, a small town just outside of Nashville. When Kimberley was seven, her parents split up and she moved with her mother to Gallatin, Tennessee where she finished her primary years of schooling. Kimberley’s love for music was innate, and her first memories of singing began when her mother bought her, her first radio with a dual cassette recorder. “My mother bought me these books that were sing-a-longs – the Getalong Gang, Rainbow Bright, The Care Bears…I used to listen to them over and over and memorize the songs. I always loved to sing.”

“In fact, I remember one time that my dad was driving me to my babysitter’s house, and I didn’t let him turn on the radio in the car, because I wanted to sing the whole way,” recalls Kimberley. “ I had seen ‘The Wizard Of Oz’ the night before, and I was singing all of the songs from the movie…it’s pretty ironic that I ended up singing ‘Somewhere Over the Rainbow’ on Idol.”

Growing up on Janet Jackson, Whitney Houston and Diana Ross, Kimberley relied on her grandmother’s extensive vinyl collection to listen to her favorite singers. Music was a family affair, and Kimberly often sang vocals in her “first band” – with her cousins as back-up musicians. But it wasn’t until the seventh grade, that Kimberley formed an all-girl group with friends who called themselves Shadz Of U – a group that she still performs with to this day. “We used to sing a lot of a-cappella materials – it was all about the harmonies,” says Kimberley. “We didn’t have a leader of the group, and we did a lot of Gospel. We performed at many churches in the area, and on some Sundays,” she added, “we would perform at five different churches in one day.”

When Kimberley joined the choir in high school, she was advanced enough to make it into the premier high school group as a young sophomore called “The Performers”, which featured a top 20 select group of male and female singers. “Once I got into The Performers, and developed my craft, I became a lot better singer. It was really my life outside of school.”

Natural progression would lead one to believe that Kimberley would continue to pursue music at college when she began attending Belmont University in Nashville. “When I went to college, I didn’t sing at all. They had a school of music, but it was very competitive, and I didn’t want to compete in college.” Kimberley continues, “but it was really difficult for me, because I was majoring in business education, and I wasn’t singing – I felt like I had a void that needed to be filled.”

It wasn’t until a good friend of Kimberley’s turned her on to a local band, which led to her singing with various bands in Nashville. Soon Kimberley was performing with Black Widow, a group that sang Top 40, and The Imperials, a group of retired professors – in which the drummer had once played with James Brown. “I learned the most from working with The Imperials. They pushed me that extra mile to where most of my jazziness comes from.” Kimberley continued playing with local bands in Nashville for six years while going to school, but she began to feel like “this was work.” She decided that she did not want to be 40 and still singing in clubs.

She stopped performing at age 22.

“I stopped cold turkey, finished school, and then enrolled in law school,” says Kimberley. “I had my books and was slated to begin attending the Nashville School of Law last October, when I was urged by my sister-in-law and several friends to audition for American Idol.”

“I remember thinking yeah, yeah…I can do this” -- but Kimberley was reluctant. At the advice of a friend telling her ‘you’ll never know if you don’t try,’” Kimberley decided to take the plunge. American Idol was holding auditions in Nashville, and soon Kimberley found herself waiting for at least five hours a day over the course of four-five days in the waiting line. “I put in a total of 18 hours auditioning for the show. With more than 1,500 people in line, I was 1,580,” laughs Kimberley. “I was really wondering what I was doing there. I had a job, and here I am standing outside waiting to be heard. In my mind there was no rational answer to this, but I thought, ‘if I’m going to do it, I’m going to do it.”

Kimberley did it alright. She kept making it through round after round of auditions, and finally was to come to Los Angeles to audition in Glendale’s Alex Theatre for the final round. Kimberley now had to make a serious decision – begin law school or pass on pursuing American Idol any further. The American Idol auditions were the week after she was to begin law school, and Kimberley decided to withdraw from law and take the risk. “It was a tough decision because in my mind, I had this road that I could see down. It was clear, there was no fog. And now I was going down this road that was very foggy, and I couldn’t see my hand in front of my face.”

Regardless, Kimberley felt that she had to take the chance.

The first day Kimberley showed up at the Alex Theatre, the contestants were told to look around, because the person sitting next to them may not be there tomorrow. Every day 100 people went home, and then 20, and then groups of eight were split up into the Top 32. It was in her group, that she met her fiercest competitors, yet closest friends, Clay and Ruben.

“At this point in the process, it was very nerve-wracking, because every night they gave us something different,” says Kimberley. “One night,” she continues, “we didn’t stop rehearsing until 11:00 p.m. ,and then they gave us cold lyrics that we had to back to our hotel rooms, make up a song for them, and come back and sing it the next morning. We had to be creative…I did a lot of prayer.”

The final day came when Kimberley made it to the top three finalists with Clay and Ruben, but lost out by a slim margin of America’s votes to continue to the finish. Regardless, Kimberley was so proud of her two friends that she had become so close with over the course of the American Idol experience. “It was a close race…the night I got voted off, there was a 2 percent vote between the runner up and myself. I didn’t lose by a long shot, so it was a great experience to have. I love Clay and Ruben, and I was happy for them.”

“It was kind of scary because I knew my life was going to change after American Idol, but I didn’t know how,” says Kimberley. “Now I’m thrilled to see where it leads with the new album,” she adds.

As work on Kimberley’s debut album is in process, she will be focusing on hit material, as she puts it. “I just want hits. The first song I recorded totally jumped out at me…that’s what I’m focusing on for the new album, whether it be pop, R&B or ballads.”

When asked about her musical inspirations, Kimberley comments: “I’ve been inspired by a lot of people – my answer to that is that every artist has something to bring to the table…because they’re all different. There are so many superstars and popstars because they all have something. If I take just one and model myself after one particular artist, then I’m limiting myself. Take Aretha Franklin and Patti LaBelle, both R&B singers, but if I was to choose one, I’d miss out on everything that the other has to offer, because their styles are totally different.”

“So I’d say…that my inspirations are Whitney Houston, Sade, Aretha Franklin, Patti LaBelle and Janet Jackson, because they are all different, but the one thing that they have in common is that they all have longevity to their careers. Kimberley adds with a huge smile, “this is what I would like for myself.”

“I would love to have mass appeal – to everybody, and longevity is #1 on my priority list,” she adds. The bottom line would have to be that I want to keep singing, put out hits, and be around for years. I want to be around for a long time.”

The beginning is now just around the corner for Kimberley…and the fog is just starting to clear. Look out for the debut album from Kimberley Locke coming soon. 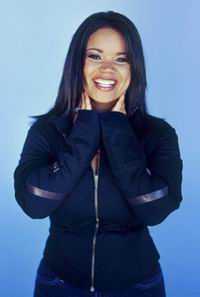