"Zerospace is the place you find balance," explains vocalist and lyricist Free Dominguez. "This record is all about the search for balance in life, and how you really can't ever find it unless you acknowledge the presence of and understand the extremes."

Throughout their sophomore release Zerospace, Kidneythieves not only acknowledge the presence of extremes, they embrace them and oscillate freely between them in a quest for balance. Entrancing the listener with teasing jaunts to musical and lyrical tangents, Zerospace stands testament to a creative team that has grown emotionally and spiritually.

"We needed to vomit in a lot of ways on the first record, from our psyche and the repression that we both had inflicted on ourselves," explains Dominguez. "On this record, we've grown mentally, physically and spiritually, and have taken some of the tools we've found together and made things better."

"We have a natural chemistry in terms of her patience to work with me and my being completely inspired by her as an artist, singer, and wonderfully creative person," explains Somers. "The chemistry is the magic."

The chemistry between Somers and Dominguez is readily apparent on the salacious "Arsenal," which enthralls the listener in a hypnotic swirl of throbbing beats, fades and effects. Amidst the aural trance, Dominguez sensually suggests, "She's a time bomb with her vibe on, she's gonna use it and surprise them." Similarly, "Placebo" emerges mysteriously from atmospheric vastness, gradually gleaning percussive elements and settling into a languorous existence. As the song evolves, Dominguez whispers a lesson to herself, "No more wishing wells that never come around. No more growing trees without a ground."

Kidneythieves' compositional magic allows Zerospace to adeptly roam from the hard-edged industrial guitar onslaught of "Before I'm Dead" and semi-apocalyptic mayhem of "Dyskrasia" to the sweet placidity of "Serene Dream."

Replete with cello and viola, "Serene Dream" exemplifies Dominguez's penchant for releasing her emotive inner voice, eliciting tacit involvement with everyone who comes in contact with it. With a soft and alluring innocence, Dominguez recounts her nocturnal experience, "Serene Dream / free of thirst and pain / heavy turns to cake / Serene Dream / where the ethers speak."

Where "Serene Dream" appears as an angelic apparition on Zerospace, the primary essence of the album fittingly resides in the teasing title track. Lumbering out of the gates on disjointed guitar snippets, low end and a variety of effects, the cut stops and changes directions at will, evolving through the last note without losing an ounce of allure. Lyrically, "Zerospace" underlines Dominguez's playful storytelling style with the contradictory assertion, "I am a fallen zero / below the glaciers of the evil / I am a golden superhero / above the sun and all the people."

"Looking back, I had already figured out how to find my own delicate balance, and I wanted to express how I got there," explains Dominguez. "How can you know unless you've already experienced it?"

Dominguez and Somers have both experienced unsatisfying career extremes prior to creatively gelling as Kidneythieves. Originally a drummer, Somers met his musical mentor Sean Beavan of Nine Inch Nails fame (credited with assistance in mixing Zerospace) at Ohio University in the mid 80s. Aside from a propensity for playing early 90s dirge, Somers became interested in an emerging industrial artist named Trent Reznor.

"I was always sort of blown away by what he had done with Pretty Hate Machine and everything since," explains Somers. "My biggest inspiration was what he did to take industrial music from being not very accessible to something very listenable - combining pop melodies with heavy industrial dirge music, and all the studio tricks and fidelity of it - everything about it."

Somers gradually built himself a studio via proceeds from various gigs with a variety of musicians, as well as composed music for movies and television.

Having written her first song by the age of six, Dominguez lost track of her musical destiny in lieu of other creative pursuits such as poetry and dancing. Regaining her direction later in life, she too experienced a number of creative pitfalls prior to meeting Somers through a neighborhood restaurant manager.

"I realized I was not completely fulfilled writing with the person I was working with, and a few days later I went into the restaurant and there was Bruce," explains Dominguez. "We went into the studio and it clicked. It just seems like what we should've been doing all along."

"Once there is an awareness of sustaining balance, it's time to move forward, " explains Dominguez of Zerospace. "This struggle is over." 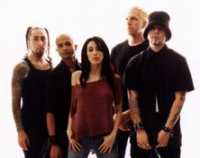