For some of us, destiny’s pull is too strong to resist. Take 15 year-old Khalil for example. Two years ago, Khalil was a star basketball player at his junior high school who was completely focused on perfecting his b-ball game until his Aunt overheard him singing one day around the house. She was so taken by her nephew’s natural ability that she encouraged him to upload a video of himself singing online so the rest of his family could marvel at his inherent ability.

Within weeks of posting a clip on youtube, Khalil received an email from record executive Kevin Wales, who set up an audition for Khalil with Island Def Jam President L.A. Reid. Khalil was signed almost immediately, proving that even though he may have been unaware of his innate power to perform, he was indeed born to sing.

“I never really wanted to be a singer so for me to audition for L.A. Reid was amazing!” says Khalil. “A lot of people at school were making fun of me at first like, ‘Ahhh, you sing?’ I was like, ‘Yeah, it’s crazy right?’”

Khalil was born 15 years ago in California’s Central Valley. When he was three months old, Khalil started living with his Aunt and Uncle in Antelope, a suburb just Northwest of Sacramento. He excelled in sports and when he was 11 and his family moved to North Carolina, Khalil was made captain of his school’s basketball team. Although he was a natural on the court, his basketball was quickly replaced by a microphone the day Kevin Wales discovered him singing Michael Jackson’s “She’s Out of My Life” online in October of 2008.

“I went to my Aunt and said, ‘Yo, this guy hit me up on youtube,’” says Khalil about the first time Worldwide Entertainment CEO Kevin Wales contacted him. “My aunt reached out to him- to see what he was all about. Soon after they started talking, I was on a plane heading to Atlanta. Kevin and I were going to have a meeting.”

Once in Atlanta, Wales encouraged the gifted young vocalist to record some songs in the studio. Over the next couple of months, Khalil started developing a love for singing while working with a group of producers and songwriters. “I thought about it a lot and was like, I like singing,” remembers Khalil. “Then I just fell in love with it when I started going into the studio.”

After recording songs, Kevin and his associate and well known industry A&R Kawan “KP” Prather (Usher, P!nk, T.I.) brought Khalil to meet L.A. Reid. “I flew up to New York and I walked into the Def Jam building and he had me waiting for like 10 minutes, which at the time felt like way longer,” says Khalil. “Finally they called me in and I said what’s up to L.A. and then he asked me to sing. The first song I sang was ‘Goody Goody’ by Frankie Lymon. I was 13 years-old and he was like, kids your age don’t even know about songs like that! He was impressed and said I have a great voice and tone.”

Khalil left the audition and returned to his hotel exhausted only to find a lawyer from Def Jam knocking on his door less than an hour later. “We negotiated the contract with Kevin Wales, his lawyer and the Def Jam lawyer in like an hour,” says Khalil. “I was signed to Def Jam probably three hours after I met with L.A.”

Once his record deal was secured, Khalil moved to Atlanta to begin working on his debut album. For the past year and a half he has attended a private school while putting the finishing touches on his first LP which features a mix of ballads and up-tempo songs. Khalil wants to follow in the footsteps of the beloved R&B artists he pulls inspiration from, such as Sam Cooke, Michael Jackson and Usher.

“I just want to make great music,” says Khalil. “The state of music now is not as good as it was back when the Stevie Wonders and the Donny Hathaways were out. I want to bring back great records and the fact that people can still make them. I feel like artists used to tell a story when they made music. Now, I feel like the story isn’t ever completed.”

When it comes to creating his own narrative, Khalil has had the opportunity to collaborate with a brilliant team of songwriters including Grammy Award winning writer Sean Garrett who wrote the up-tempo “Girlfriend”, about wanting to have a girlfriend and fall in love.

With featured performances from Young Money’s Lil’ Twist, Khalil’s Worldwide Entertainment/Def Jam debut album promises to have a little something for everyone, both young and old. “I never want to make bubble gum pop records that only kids can relate to,” says Khalil. “I feel like if I just keep making great, timeless records, I will have a lot of longevity.” There’s no fighting fate. 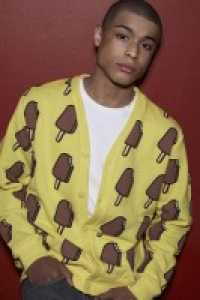