Take a voyage somewhere free, grown up and sexy. Break away from the formulaic. Go somewhere pleasant, peaceful and soulful, where true love and lazy afternoons reign supreme. That's where Detroit native and singer/ musician KEM takes you on his sophomore LP KEM Album II. Filled with songs you can really ride to, he sticks to the critically praised R&B/jazz sound that made his debut album Kemistry, a certified gold hit.

"To me, this album is better than the last one, because I feel better as an artist," KEM admits. "I stayed in the vibe of the first CD. I took the production up a notch. And I had more time to develop my songs."

KEM knows singing songs for adult contemporary listeners is what drives his success. "I am not trying to market to that get naked crowd. My primary purpose is to serve people who like what I am doing."

It's precisely this crowd that the musician sings to on KEM Album II. With the lead single "I Can't Stop Loving You," KEM sets himself apart from his contemporaries with raw and unselfish emotion. He believes his honesty is one of the main reasons he's garnered such a devoted fan base.

"I toured with songs from the album and I did about 15 or 20 cities. And the crowd sung the words of the new songs like they had heard them before. After I noticed the audience's reaction, I went back in the studio and changed some of the songs. Now it's more lyrical. I talk about love. I talk about walking in faith. I talk about God. Mostly, my songs are about the human condition."

Frustrated with the glut of tired songs he heard on the radio and determined to breathe some fresh air into the scene, KEM wrote, produced and financed his debut album by waiting tables and singing Top 40 covers in a wedding band. Motown later signed KEM and re-released the Kemistry album which went on to sell over 500,000 copies nationally.

And though hip-hop dominates and most R&B is a hybrid, KEM kept the MC's on the sideline. "There is no rapping on my album. I feel like there are a lot of people who already do that."

KEM Album II is jam-packed with hot tracks. On "I Can't Stop Loving You," KEM pens a classic love story that pulls no punches. "I deal with the struggle of relationships and how hard it is to love someone. It's something adults can relate to."

His label mate Stevie Wonder plays the harmonica on "You Might Win," an upbeat message about giving your all. "The song is about stepping out and taking a chance. Go for it. Chances are that if you put your heart in it, you'll get whatever you are seeking in life."

Other standouts include "Heaven," where KEM sings about finding his zenith in a woman and how it transformed him.

Some might decry him too religious, but KEM insists that the most high is why his life is soaring. "My career didn't take off until I connected with my spirituality. That's why I take time on stage and on the album to administer spirituality to people. That's one of the things that I am most proud of."

If you ask KEM, that's the reason he wrote the song "Each Other." "It's a conversation between God and me," he says. "I'm talking about our need for more of him in our lives. I made this song because I feel like we are destroying each other. I'm telling God: please show us the way. It's a testament to the times we are living in. More people need to be able to express that freely."

KEM especially dug recording "I'm Into You," a trumpet-laden jam where a man falls head first for a woman. "It's a really fun tune. It's funky. I'm singing in a falsetto voice and telling a woman that I'm into her everything: toes, heart, soul, everything. I even like the way she says my name."

He might be a long way from Detroit street benches and being isolated from his family, like he was at one time, but the hardworking and humble KEM never forgets what the journey has taught him. That's why the music on KEM Album II reflects a performer comfortable in his own skin. And while some performers are spoiled and often complain about certain perks, KEM is simply overjoyed to perform and play music for a living. Everything else is just icing on the cake. "Every day I reflect on where I've come from. Right now, I don't have any problems compared to sleeping outside or dealing with addiction. Thankfully, I've been equipped by a higher power to battle those things."

Finally, there's s a soul singer who concentrates on nothing but the music. "There is no gimmick," KEM says with a mischievous grin. "Just a cat and his keyboard and that's good for me." 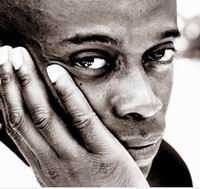