Keith says he learned to play guitar as a six-year-old in Australia, when a young woman wanted to place an ad in his dad's shop window offering guitar lessons. His parents made a deal with her that they would advertise in return for lessons for their young son. He had a natural ability and young Keith was winning talent shows by the time he was 8. He also was involved in a youth acting company which required him to sing, dance and memorize lines, all of which led to an ease on stage that would serve him well in his music career.

With a father who was deeply interested in American culture and country music, it was natural that Keith would gravitate towards country music early on, when he was influenced by the singing of Glen Campbell, Dolly Parton and Don Williams, and the songwriting of Jimmy Webb (Galveston). As a teenager already playing club gigs with a band, he became interested in the guitar playing of rock stars like Dire Straits' Mark Knopfler and Fleetwood Mac's Lindsey Buckingham, and after in-depth study of their techniques and endless practice, Keith brought those influences to his own music. The resulting unique style of blending country music with rock-style guitar (which he sometimes refers to as "funktry") brought him success in Australia, where he charted three #1 singles and had a successful solo album.

All along Keith knew that to be a real success in country music he would have to go to America. He made several trips to Nashville in the late '80s where he collaborated with such songwriters as Billboard "Songwriter of the Year" Gary Burr, multiple CMA-winner Trey Bruce, and Hall of Fame member Dave Loggins (Please Come to Boston, Pieces of April).

Soon he realized that the move to America would have to be permanent and headed to Nashville for good. Once there, with his Australian bandmate Peter Clarke, a drummer, he formed the three-piece band The Ranch. Their original bass player soon returned to Australia, but West Virginian Jerry Flowers quickly fit in as their new bass player. Their live shows featuring Keith's hot lead guitar playing led to a record deal with Capitol Nashville and a management contract with I.R.S. Records founder/The Police manager Miles Copeland, and their debut album, The Ranch, was released to critical acclaim in 1997.

By 1999, Keith released his self-titled solo album. His tour in support of that album included opening for such major acts as Dwight Yoakam, Faith Hill and Tim McGraw, as well as headlining his own shows. His stunning solo performances as an opening act won him numerous fans in the Yoakam/Hill/McGraw audiences, and his talent, hard work, countless interviews and openness and friendliness to his fans paid off with a Top 15 hit in It's a Love Thing and a Top 10 single with Your Everything. 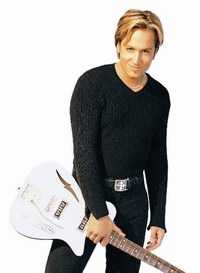