Kathryn Williams, of course, doesn't need to justify herself or her songs. They do a good enough job of that all on their own. And if that isn't enough there are plenty of other people willing to do it for her. It was last year's inclusion of her second album 'Little Black Numbers' as a Mercury Music Prize nomination we have to thank for bringing her from self-financed relative obscurity to a more respected arena, where she unquestionably belongs. For once the awards did what they were supposed to, as opposed to just providing a saleable compilation CD and putting on lunch while label bosses throw cursory looks at each other. Namely to highlight a precocious and blossoming talent that knows no obvious bounds and is no stranger to inspiration, regardless of genre, record company or its likely position in the end of year polls.

With influences as timeless as Nina Simone, Nick Drake, Joni Mitchell, Bob Dylan, John Lennon, Simon And Garfunkel and Velvet Underground, a voice so heavenly and a rock solid songwriting sensibility you know you can't really go wrong with her. These days she's listening to more classical and Cuban stuff, alongside the likes of PJ Harvey and Nick Cave (the stuff she says she can't do) though she says she'll always go back to the influences she grew up with, as a kind of security blanket. She sits alongside the sparse simplicity of Kings Of Convenience and the sturdy melodies of Turin Brakes, has sung on the new Badmarsh & Shri album and worked with Twisted Nerve artist Pedro.

Her songs possess a magical quality made from sly, artful yet soulful contrasts. Her still, pretty voice delivering words that draw blood. Pastoral pop melodies that look at people with a modernist eye while spinning imagery from the natural world. Songs about liars, dogs, betrayals, depression, confusion and a quiet, seething hatred that pin down the true nature of love. The kind of music that reveals more dimensions with each listen, that stills drunk crowds into reverent silence, that seduces people that thought they'd had enough of singer-songwriters, especially female ones with acoustic guitars and sweet voices.

Kathryn Williams was born in Liverpool in 1974. Her father was a folk singer in the 1960s and music, as you'd expect, surrounded her. She got stuck into the piano until she realised it was the classic lure of the guitar that really got her, which she'd sit with for hours thinking she'd invented chords until someone would point out it was nothing more complicated than a D minor. She went to art college in her adopted home of Newcastle. A flat mate told her that she'd never make an artist but she could see her writing songs. This, as you can imagine, made her angry, but true to her friend's prophecy when she left she never picked up a paintbrush. But she did her guitar.

As prolific as she may have been though, she never intended people to hear her songs. Until, that is, her friends brandished her selfish and booked her onto a songwriters night. Which, though admitting it was a really big deal to her, she did. Thank God. She was noticed by a label and recorded demos with PJ Harvey collaborator Head. Despite their obvious quality, she never heard from the label again. Cue a fledging distrust of the music biz and a decision to set up her own Caw label and put out a debut album, 'Dog Leap Stairs'. Cue immediate critical acclaim, the building of a word-of-mouth following, the release of 'Little Black Numbers', which with that Mercury nomination catapulted her to a kind of stardom.

Everything that's followed, including being tailed by the BBC for the Mercury Prize show, thrown into minor celebrity circles and actually playing gigs, to people, lots of people, in her own words has been a bit mental. Going from playing to maybe 100 people in one go to 2,500 at a Nick Drake tribute almost had her literally running out the door. But again, thank God she didn't. If her new demos are, as she quietly claims, making her proud and better than 'Little Black Numbers', you should be glad she's decided to stay too. 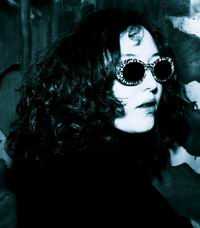