Long ago, a young Sean Devlin was wandering down the hall of his high school, when he stumbled upon Teague Quillen, quietly sitting in a corner and touching himself. Not a lot, just a lil’.

“…What are you doing?” Sean asked.

Randomly, the two decided to start a band. After going through several crappy names and very crappy songs, they emerged with their amazing drummer Eric Sheffield (the only talented member of the band) as the Rock & Roll phenom that is K-1 Royal.

The K-1 boys plan to play many shows, record a c.d., tour extensively, sit next to Rachel Leigh Cook, and eventually take over the world. 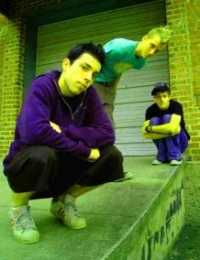