Prior to forming his first band, Craig was auditioning for bands when entering high school in the United States in 2000, none of which he made the cut for. Craig then formed the band westerHALTS in 2000, a garage band from Tacoma, Washington. At 15, Craig released his first known song with westerHALTS titled "Change, Leisure, and Retirement" in 2001. He then joined as the lead vocalist for Tacoma based pop rock band Ghost Runner on Third in 2002.[4] He received positive reviews with this band's debut EP, Speak Your Dreams, released on January 4, 2005. Allmusic stated that Craig was: "the band's secret weapon, a passionate vocalist. There's not a bad track to be found here, but Craig tends to outshine his bandmates throughout."[5]

Early on in his career with Ghost Runner On Third, it has been cited that overwhelming drug problems led to his departure as told by Dance Gavin Dance in their old blog concerning Jonny Craig after he was kicked out of the band. Though Jonny Craig has denied the statements made, Dance Gavin Dance has not backed off from those remarks, which they explain was the reason for all the band's problems and partly for his former band Ghost Runner on Third.[6] Dance Gavin Dance has also blamed Sean O'Sullivan's departure on Jonny Craig's behavior primarily, although there were other contributing factors.

Despite their past differences, both past and present members of Dance Gavin Dance have since become friends. Consider the Thief (Sean O'Sullivan's current band), were also listed in Emarosa's Relativity album on the special thanks section of the booklet.
[edit]
Dance Gavin Dance and Emarosa

In an interview done on March 2007, it was cited that Jonny Craig came up with the name Dance Gavin Dance and had planned to name his previous band, "Ghost Runner On Third," by that name.[8] After being kicked out of Dance Gavin Dance after the "Saints and Sinners Festival" in New Jersey, Jonny Craig immediately filled in for A Skylit Drive and toured with them while their then-lead-singer Jordan was ill. The band made it very clear at shows and on their website that he was not the new lead singer and the situation would only be temporary. It had been only 2 weeks since he quit Dance Gavin Dance in which he joined Emarosa who was left without a lead singer.

On August 18, 2010, Dance Gavin Dance exclusively revealed to Alternative Press that they have parted ways with vocalist Kurt Travis and that Jonny Craig, along with other original vocalist, Jon Mess, will be returning to the band to record a new album. The reunited lineup will also embark on a headlining run next spring. Craig will remain in Emarosa as well.[9]

In early September 2008, (then current) Chiodos and Cinematic Sunrise vocalist Craig Owens, announced that both he and Jonny Craig would be recording an EP record by the end of the year, also mentioning Vic Fuentes and others.[11]

On December 15, 2008, Alternative Press officially announced and revealed the name and lineup of this new project, Isles & Glaciers. The band's first EP, The Hearts of Lonely People, was produced by Casey Bates in Seattle, Washington, was reworked on April 2009 in Michigan and was released March 9, 2010.
[edit]
Solo work

Jonny Craig has released the solo album A Dream is a Question You Don't Know How to Answer on August 18, 2009 through Rise Records. This is the first individual artist on the label. He has been taking solo promotion and press photos for the release in late 2009 with photographer Gage Young in Orlando, Florida.[12]

Rise Records has listed Jonny Craig as an individual artist on their official website, and released his myspace music page.[13][14]

He further released three songs on his myspace from the solo album, Titles, "Istillfeelher III", "Children of Divorce" and "7 AM, 2 Bottles And The Wrong Road". Craig went on his first solo tour from November through December, supporting acts AFI, Cinematic Sunrise, and then headlining with support from Tides of Man and Sleeping With Sirens. He was headlining a tour with support from Tides of Man and Eye Alaska and will be playing The Bamboozle[15] festival and SXSW.[16]

Craig will headlining the "White Boys With Soul" tour with Fight Fair, Breathe Electric, Mod Sun, and The Divine.[17]

Jonny has also recently revealed that he is recording another solo album.[18]

In an interview at Warped Tour with MindEqualsBlown.net, Jonny revealed he's attempting to work with Alex Deleon of The Cab on a B-side from his solo album.[19]

In an interview with indie star tv, he proceeded to claim an atheist belief with a Christian background especially in music. He states that all of his music is soulful and has some kind of meaning mainly because his music career began as a child singing gospel music with his church/school.[20] Jonny Craig gives all credit for his musical talent to his grandmother (Ruth Lyons) who he says, "taught me everything I know about music, she was super Christian, super gospel. Her husband was a preacher. She taught me everything I know about music and despite the fact that I may not believe in her beliefs, I believe in what she taught me."[20]

Craig is inspired by soul music, mainly the artists Aretha Franklin, Boys II Men, and Craig David. He has also mentioned Motown acts and the band Mewithoutyou as influences.[20][21]

Craig's voice has been compared to Michael Jackson[22] and Christina Aguilera.[23]
[edit]
Discography
With westerHALTS
Change, Leisure, and Retirement (2001)
With Ghost Runner On Third
Speak Your Dreams (2005) [24]
With Dance Gavin Dance
Whatever I Say Is Royal Ocean (2006)
Downtown Battle Mountain (2007)
Downtown Battle Mountain Pt. II (2011)
With Emarosa
Relativity (2008)
Emarosa (2010)
With Isles & Glaciers
The Hearts of Lonely People (2010)
Solo work
A Dream Is a Question You Don't Know How to Answer (2009)
[edit]
List of guest appearances
Lower Definition
The Greatest of All Lost Arts [25]
"Pueblo Cicada"
Broadway
Kingdoms
"Don't Jump the Shark Before You Save the Whale"
Pierce the Veil
Selfish Machines
"She Makes Dirty Words Sound Pretty"
MikeyWhiskeyHands!
Unreleased
"This Ain't a Game" (credited as Dr.Craig) [26]
"$ex, Drugz and WhiskeyHands" [26]
Falling Closer
The Sweet Release
"The Bridge" [27]
Ambrosia Caprice
Live Show @ The Boardwalk
"The Cast" [28]
Bizzy Bone
Crossroads: 2010
"Bottled Up Like Smoke"
The Game
Break Lights Mixtape
Heels & Dresses
Woe, Is Me
Number(s)
Our Number(s)
Desolate (The Conductor)
MOD SUN
Unreleased
Become My Life [29] 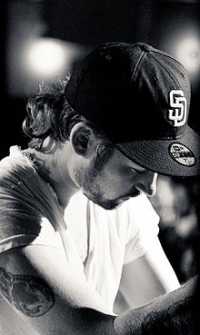