Growing up in Florida and Georgia before moving to Potomac, MD, at the age of 11, indie rock innovator John Vanderslice grew up listening to a mix of Led Zeppelin, Creedence Clearwater Revival, the Kinks, and Southern rock, instilling an eclectic musical vocabulary. Forced into piano lessons as a child, he eventually picked up the guitar in the eighth grade and would go on to form various bands in his teen years. His songwriting went on to add the influence of David Bowie, the Beatles, Bob Dylan, King Crimson, XTC, and early Genesis, culminating in his five-year tenure with the much heralded experimental pop band MK Ultra. Their collaboration would produce three well-received albums that would result in an opening spot on two Sunny Day Real Estate U.S. tours.

Vanderslice would start Tiny Telephone, a 1700 square foot analog recording studio, in 1997. Boasting a variety of respected and experienced house engineers, Tiny Telephone has become known for providing an affordable recording outlet for San Francisco's indie rock community and would produce Vanderslice's solo debut in 2000. Riding on a wave of press caused by a media sensation surrounding the track "Bill Gates Must Die," including wild accounts of threats of lawsuits and various harassments from Microsoft that were later admitted to be a clever hoax, Mass Suicide Occult Figurines drew a substantial amount of critical praise for its meticulously crafted pop-perfect sound. By late 2000, there were rumors of a concept album follow-up - Time Travel Is Lonely (2001) - and a spring 2001 tour.

The Life and Death of an American Fourtracker, a conceptual match to TIme Travel Is Lonely, followed in spring 2002. ~ Matt Fink 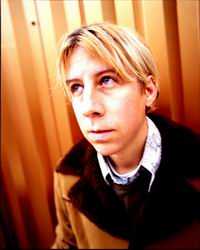