"This is a life that reads like a mixture of Shakespeare and Tennesee Williams. It is all here in Jerry Lee's own words: the scandal of his marriage to his 13-year-old cousin which broke in the very conservative UK of 1958; the shock when the media discovered he was still married to his first two wives; the loss of his two sons in horrible accidents, and his twenty-year drug addiction."

Available in the U.S. only from JLL Enterprises (see Hot New Items! in the Giftshop), this book tells the definative story of one of Rock 'n Roll's biggest legends. Jerry Lee moved his family to Ireland in 1993 to take six months off and complete his biography; it was at this time that the IRS attacked the Lewis Ranch. Unable to return home until an agreement with the IRS had been reached, Jerry worked long hours with Charles White (also known as "Dr. Rock", and author of "The Life and Times of Little Richard"), completing his story the way he wanted it told. The following excerpt is from Chapter 4, "Great Balls of Fire", which tells the story of Jerry's best known hit and his life at the time of its recording.

"Although he enjoyed the material trappings of his success, Jerry Lee began to have nagging doubts about the morality of rock 'n roll, especially when it came to "Great Balls of Fire", which reached no.1 in 1958. It was considered by many to be sexually provocative, not to say blatantly immoral.

JERRY: God gave me my talent. I don't question God. I never have. I never will. I wasn't put here to question God. I don't think I've done no wrong. They said Great Balls of Fire was pure sex, well it is, but it's sex in my way, and sex in my way is not dirty. It's pure. it's what I feel. Sex between a man and his wife whom God has joined together is a beautiful thing. They said Whole Lotta Shakin' was risque. I did them songs with my heart. It's the only way I know. I don't think God will judge me harshly. I've brought comfort to a lot of folks. Christians and atheists, they all love Whole Lotta Shakin'. Vivian Leigh said "Great balls of fire" four or five times in Gone with the Wind. I never accepted that Great Balls of Fire was a vulgar record. I finally had it explained to me - Kiss me baby / Feels good - but to me, it was still just innocent fun. Now in Whole Lotta Shakin' - Stand in one little spot / Wiggle it around just a little bit - that's sexy, that's why they banned it." 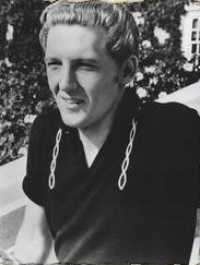