Throughout the history of pop, certain performers have attained the status of "enigma", attracting respect and fascination in equal measure; Robert Johnson, Nick Drake, The Residents, Phil Spector, these are the sphinxes of pop, men and women shrouded in mystery and the unmistakable scent of greatness. Moreover, the ultimate accolade rock can bestow is that certain individuals can be known the world over by a single name; Elvis, Madonna, Prince, Lulu, Sonia, names that will live forever in the pantheon of music.

Such an individual is James. For two decades, this elusive, charismatic, engaging individual has been one of the great treasures of British music, sometimes taking centre stage, sometimes on the margins, now a bona fide star, now a cult passion but always innovating, always adapting, always wrong-footing those who think they've got him sussed. He has been, at different times, a folkie, a stadium rocker, a guitar hero, a torch singer, a pin-up, a recluse, a "lad", a "hippie", a "monk" and yet none of these labels quite fits. James new album Pleased To Meet You sees him reunited with producer Brian Eno for a record that may be his most personal to date. "I think this is the real me?whoever that is" he says, cryptically.

Little is known of James early life. Reports are confused and conflicting, only adding to the mystique surrounding this singular artist. Accounts vary wildly; some say that he attended public school in Shropshire, other accounts deviate almost comically from this, suggesting that James was a teenage tearaway on the streets of Moss Side and the terraces of Maine Road, Manchester City's home ground. It's also said that he spent time in Hull, Preston, North Wales and even Canada during his formative years. James smiles knowingly at any enquires about his origins merely conceding, "I've been around"

It was the punk and new wave explosion of the late 70s that proved a life-changing moment for the young James, alerting him to the potential of music as a force in his life.

He took his inspiration from Patti Smith's "Horses", Joy Division and The Fall, who took the youth under their wing, arranging many early gigs for him as a support act and via the Manchester Musicians Collective. James early gigs were inspirational, seat of the pants affairs, when he would take the stage with only the vaguest notion of what he was about to do, relying heavily on improvisation and his primitive but developing multi-instrumental skills.

James soon became the most talked about and unique voice in Manchester's fertile music scene. He found himself courted by many labels, most ardently by Tony Wilson and the late Rob Gretton for Factory Records "I went along to see him at the State Ballroom in Liverpool supporting New Order and he was wonderful"

In November 1983, James released his debut single Jimone on Factory Records. Acclaim was instantaneous and music press covers soon followed as did a second single, the classic Hymn From A Village. The next year, he set out on a tour of Ireland with his friends and supporters The Smiths. Always very much his own man, James rejected the trappings of the rock life and became an adherent of meditation. This only furthered his reputation as a maverick.

Leaving Factory for US label Sire, a decision he now regrets, he recorded a debut album Stutter with the legendary Lenny Kaye, released in summer 1986. Travails with Sire, with whom his relationship had soured, meant that follow up Strip Mine was much delayed. This was a bad patch for James as he readily admits and he came close to retiring from the music business "There was a second when the future hung in the balance but I sort of came through it". But times were bad for a while. Even Simply Red's management couldn't give him the necessary leg-up and for while he was reduced to offering himself as a human guinea pig in drug trials to pay the rent.

Then his fortunes took a sudden upsurge as did Manchester's. James sporadic live appearances in the city had always been celebratory events but as the 80s gave way to the 90s, James' began to enjoy his second bite at pop success. His gigs became word of mouth "events", the hottest tickets in town and he became associated, to his amusement, with the city's burgeoning "Madchester" scene, and found such unlikely supporters as Sean Ryder and the Happy Mondays

He had borrowed money from a friendly bank manager to finance a live album One Man Clapping in 1989 and followed this the next year with a new studio album for new label Fontana Gold Mother. It was to prove a turning point. Hits like Come Home and How Was It For You took James to another level of success where he could routinely fill the GMEX Arena. In March 1991, a single version of his live anthem Sit Down reached Number Two in the charts, held off only by Chesney Hawkes The One And Only. It was a momentous phase in the artist's career culminating in a huge outdoor gig at Alton Towers and the album Seven. The reasons for the title remain unclear, though James has hinted that it may be a reference to his multi-faceted personality. On the continent and in the States, some critics and audiences had wrongly assumed that James was a band rather than a person, something that James himself has had to politely but firmly put right in thousands of interviews.

James turned his back on the epic stadium-rock sound of Seven for a warmly organic acoustic sound arrived at during the Autumn 1992 tour with Neil Young. This was showcased on the brilliant 1993 collaboration with Brian Eno, Laid which spawned college hits in the States and rave reviews on both sides of the Atlantic, and an experimental companion piece Wah Wah. Financial difficulties in the mid-90s almost forced retirement on James again but, ever the survivor, he bounced back. A Greatest Hits album in 1998 uncovered a huge wave of residual popular support and shot to Number One. The following year, he came back with the album Millionaires which many pundits thought was his best album to date.

They may reconsider in the wake of Pleased To Meet You. From the ethereal funk of Space to the anthemic swell of English Beefcake to the glacial beauty of Alaskan Pipeline, this is an artist at the height of his powers. The sound is distinctly contemporary but James trademarks are all in evidence; impassioned vocals, taut, muscular rhythms, melancholy and joy in equal measure and the unique atmospheric washes of Eno's production. Eno himself found James to be an artist "reborn somehow. It's like when people make their first album they're full of enthusiasm and excitement and they know what they're doing and it's a pleasure. This was like making a first album. I think it's the best record he's made. The standard is so high on every song. There's nothing where you think it could've been better. We've got too many good songs, more good songs than we can put on the record.. It's very regressive in a way, saying, 'Let's go back to making a record that records an artist at his peak.'"

Unravelling James' character is as difficult as teasing out his origins. He is the true chameleon of rock, making Bowie look more staid and more set in his ways than a Daily Mail editorial. At times, he can appear almost monastically serious, sipping thoughtfully on an Aqua Libra on the back of the tour bus. At other times, it's hard to reconcile this with the party animal who once set off a rocket launcher from a hotel window on a US tour. He has a twenty year olds enthusiasm for his chosen field coupled with the maturity and wisdom of some twice that age. He is fickle in his allegiances, claiming to support Manchester City, Leeds Utd and Barcelona. But this flighty nature also works to his advantage; he was proficient, at the last count, on drums, bass, guitar, violin, cello, keyboards, accordion and vocals. He is also a really great dancer.

After many years of covering his tracks, sidestepping and double-talking, he seems ready to step frankly into the spotlight. He lights up a cigarette - though I was sure he didn't smoke - and sighs "I think for a long time I've been leading a double life?at least. I think it's time people finally met the real me" 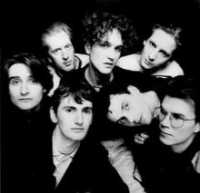