Just like Treach, and Vinnie by nature I'm naughty baby

Turn down for what? It's time for the afterparty baby

It's a quarter past three, so what we doin' baby?

Shake ya home girls, it's time to lose em baby

Got that Donell Jones playing, yeah we groovy baby

Me and yo man, don't compare so don't confuse me baby

He the trailer, and I'm the actual movie baby

And I can't even front, I ain't gon' lie

And after all of this champagne, ya probably taste like warm pie

Ya probably go to sleep stressed out

Ya probably really get stretched out

And I ain't talking bout ya, that's stretched out

From the shower as soon as ya step out

Neva been a minuteman, nor a one rounder

Every stroke I'm aiming deep, and tryin' to make ya scream louder

Beat it up, knock that pussy out the park, ya know I'm bout that

I ain't tryin' to play no games, I'm tryin' to fuck the soul out ya, what's up

It's a quarter past three

Girl, what's it goin' to be

Shorty got her eyes on me

We've been talkin' since two

Girl, what ya goin' to do

Tell 'em that you're ridin' with me

Ugh, What ya know about that breakfast in bed?

Nothin', cuz we always eatin' each other instead

Oh Lord, we can't even see each other and chill

No Lord, we met each other in LIV

I wanted to luv what she feel until she say fuck it, it's his

Unbutton brassier, she look at this fuck from the rear

I put her hands up on the mirror

They smudge and they smear

When we making luv it's sincere

When we making luv it's a severe

When we making luv it's surreal

The freaky type for real

She keep it tight and sealed

She get this pipe, this drill

She feed me, last who knows

Lord I just luv the meal

And I just checked my watch, she said 'don't check yo watch'

But it's so late, my girl ain't dumb, she gon' connect the dots

Fuck it, we flee the scene, like we be fifteen

I get deep between, and then she sleep and dream

Ass so fat, there's no way around that

Ya got to slim waist, ya got to round back

I got to few pills, I got to loud pack

I'm tryin' to hit it hard, and watch it bounce back

Against the wall, or where the couch at

Or in the bedroom, or where the shower at

Or even sky high on the balcony I'm all about that, don't doubt that

Ain't too many things that we could do at this hour

Beat it up, knock that pussy out, shout out to Ronda Rousey

I ain't tryin' to play no games, I'm tryin' to fuck the soul out ya, what's up 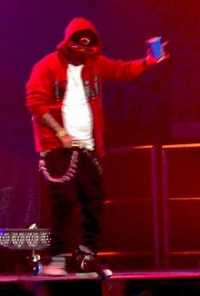