Jack Hody Johnson was born in 1975, near Haleiwa, on the North Shore of Oahu, Hawaii. Being the son to a famous surfer throughout the islands Jeff Johnson naturally led to an interest in surfing at a young age, having practically learned to surf as he learned to walk, the man has grown up on his board. He eventually became a champion surfer who scored a sponsorship with Quicksilver and who seemed to be heading towards the professional route.

Jack began surfing the universally revered and feared Pipeline at age 10. By 17, he made the finals at the Pipe trials, becoming the youngest invitee ever to do so at the world's most prestigious surfing event. Unfortunately, Jack suffered a near death experience at age 17 after crashing his body into the reef during the Pipeline Masters.

While recovering, he pursued his interest in filmmaking and soon became a surf film director, photographer, producer and score composer. Though he received much praise for his surf cinema documentary, Thicker Than Water (1999) and also a follow-up surf flick called The September Sessions (2000) which won The Surfer Magazine Poll award for best film of the year.

Jack Johnson also began writing songs during his college years, having played the guitar since 14 and being brought up with influences such as Nick Drake, Ben Harper, the Beatles, Bob Marley, Neil Young, Bob Dylan, and A Tribe Called Quest.

One day G. Love was introduced to Jack for a day of surfing and ended up recording Jack’s song “Rodeo Clowns” for his last album Philadelphonic. It became the first single from the album and Jack sang and played on the track.

His four-track demo caught the ears of Ben Harper's producer and right hand man, J.P. Plunier, who worked with Jack on his debut album Brushfire Fairytales in early 2001 with Harper and his lap steel guitar making a guest appearance.

Jack Johnson's newst cd, On And On was produced by Mario Caldato Jr. It was recorded in his native island of Hawaii, carrying the same carefree aloha spirit that graces his debut album and showing that rock stardom has yet to change this wave-riding island boy. On And On also features the same line up from his debut with Adam Topol on drums/percussion, Merlo Podlewski on bass, and none other than Jack Johnson on vocals and guitar. 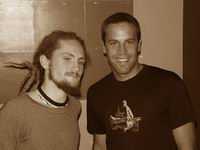