Sam Beam lives in Miami, FL and makes music under the name Iron & Wine. He is a father of two (both daughters) and teaches cinematography at a local college. September 2002 saw the release of his debut album, The Creek Drank the Cradle. That record was/is hushed, literate, intimate, melodic: a quiet treasure which, with its unaffected candor and depth, found fans all over. Both in the bio for the first record and in (perhaps an unwitting, self-fulfilling prophecy set in motion by that bio) subsequent press surrounding the record, a fair amount of focus has been narrowed on these two facts: Sam Beam lives in Miami and most of his music is home-recorded. This lends some interesting context, but really, these things are solely that: context. The simple explanation is that Sam likes the warm weather and home is where the four-track is (it also happens to be where his family is).

In September of 2003, Sub Pop released a 5-song EP culled from the recordings that made up The Creek Drank the Cradle as The Sea and The Rhythm. And, some discerned a new undercurrent of optimism within these. Between now and the first record, Sam spent a far amount of time on the road, both solo and with a band. 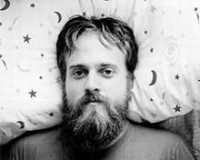