Powerful, riff-oriented, uncompromising - synonyms, that perfectly fitted all previous releases of Iron Savior and will become more valid than ever with the new album Condition Red. On said album singer / guitarist Piet Sielck's band knows only one direction: Full Speed Ahead ! Be it the uptempo opener 'Titans Of Our Time', the successor 'Protector' or the anthemic 'Tales Of The Bold': Iron Savior always present up-to-date Heavy Metal, as known from the genre's role models Judas Priest or Iron Maiden, yet keeping an unique and unmistakable edge. No flirts with other styles of music, no trips to pseudo-trendy fields, no giving in to lame music television's questionable requests, no guest musicians and no cheating with studio technology, just the essence of a strong band. The tag "Iron Savior" always guarantees pure Heavy Metal and what is entitled Condition Red delivers 66:44 minutes. This is true for all 13 songs of the current album and especially for the titletrack, a masterpiece of energy, melody and sheer speed.

Apart from the band's compositional and technical skills another important quality is the personal bond between all five musicians, who have known each other for years and are perfectly in tune by now. Everybody knows everybody elses capabilities, and so Piet Sielck (guitar / lead vocals), Joachim 'Piesel' Küstner (guitar / vocals), Jan-S. Eckert (bass / vocals), Thomas Nack (drums / percussion) and Andreas Kück (keyboards / vocals) complement each other in a very natural and inspiring way.

Between October 2001 and January 2002 the quintett has recorded their rhythmically most advanced album at Hamburg's 'Powerhouse Studio', one highlight is followed by the next, completed by an excellent cover version of Seal's classic 'Crazy'. The huge Iron Savior logo on the cover design predicts with pride: the future is wide open!

History:
Iron Savior first attracted attention in 1996, when rumors claimed Piet Sielck had an exciting new band. A few months later the self-titled debut hit the stores, convincing fans and media alike. An invitation to the Wacken Open Air and a successful tour followed. Iron Savior recorded the successor Unification in late summer of 1999, which was released early 1999 and made it to the #79 mark in the German album charts. The same year the band went on tour with Grave Digger and also with Running Wild in early 2000. The rest of the year Sielck & Co. prepared for the production of the third longplayer Dark Assault, which came out January 2001 and was presented on yet more live shows. Now it's time for Condition Red, the strongest and most homogenous effort to date, which guarantees enthusiastic reactions on this year's 'Bang Your Head-Festival' and several more concerts. 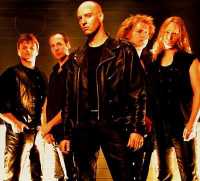