With powerful-paired vocals and the intense musical talent, this has proven to be an advantage to us and helped accomplish the sound we have been striving for. Which has helped Insolence evolve from your typical heavy band into what we are today·One of the most diverse, skilful hip-hop / metal bands around! Our style holds a variety of influences, ranging from hip-hop, rock and reggae. You'll hear a multitude of tribal grooves and funk within the energetic emanation of song. Our music consists of inner strength, reality of life, remaining true to those around us as well as ourselves. Our lyrics hold strong opinions on issues that surround us all.

Insolence has made major strides in the scene by supporting such bands as Static X, Kid Rock, Coal Chamber, Soul Fly, System of a Down, Suicidal Tendencies to name a few. Making a huge impression on the bands as well as the crowd is a crucial and accomplished asset to Insolence. We have expanded our limitations to a more widespread audience, (touring nationally as well as Europe for the second year in a row) not only reaching our native loyal supporters, but also taking our music nationwide, worldwide.

With our first album "Within", our second album "Universal" and a full-length hip hop album "Terrorist" achieved, we've recently released our latest album "Poisonous Philosophy". We are proud to say each album released is in the "top ten" in sales in the San Francisco and surrounding Bay Area. Insolence has accomplished all of this independently. We feel privileged that we are able to communicate our feelings and opinions through our own expression of music by entertaining and touching our public. Listen to our style and you'll be content with the influences we savor in our music. 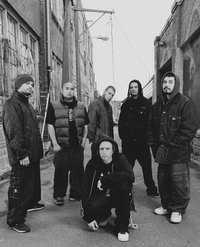